'He showed everybody in the second half of the season that, for his age, he's one of the top players in the world,' says Colts interim coach Todd Miller
Jun 24, 2020 8:00 PM By: Gene Pereira 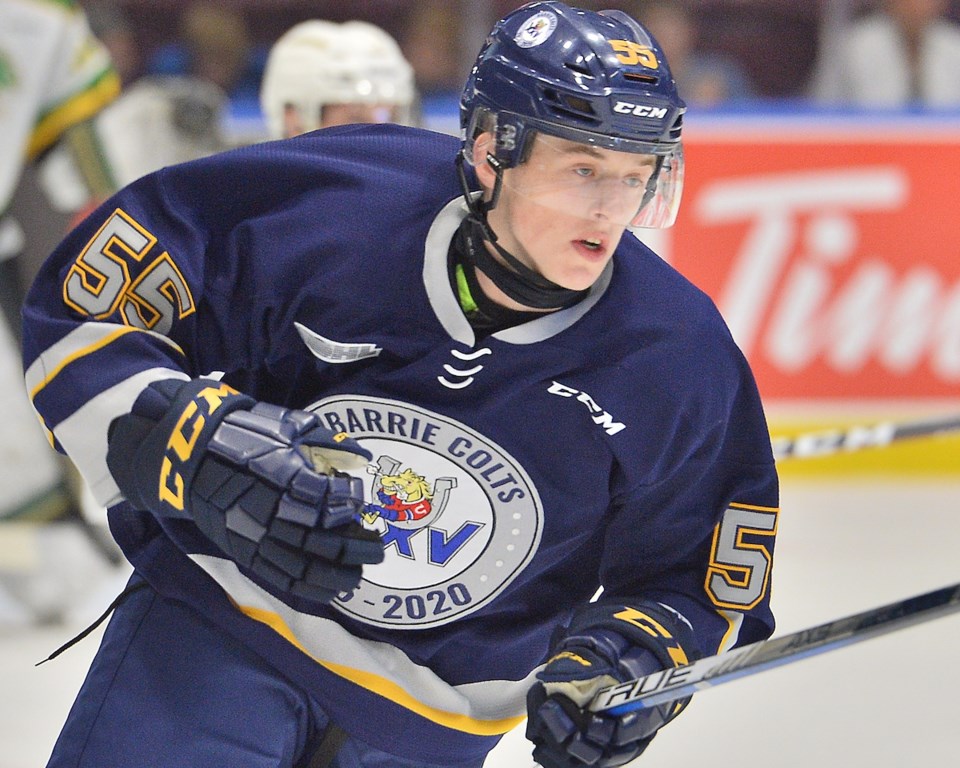 The Clarke household in Nepean, Ont., has had plenty to celebrate of late.

The younger Clarke didn't hesitate when asked how proud he is of Graeme making the national camp, someone who he's always looked up to.

"He's always been pretty much my role model," boasted the Colts standout defenceman, who was named to the OHL's 2019-20 first all-rookie team. "I've always looked up to him and he's always done pretty much everything before me, so I just try to follow his path.

"I'm really proud of him that he made the U-20 team, especially coming off his shoulder injury. He only had nine games in the season to prove what he had, but he did really well."

Yet amongst the praise for Graeme, the sibling rivalry still burns for Clarke. Three months later, he still hasn't forgotten a regular-season game in early March against Ottawa in Barrie where Graeme stole the show with a goal and three points that earned him first-star honours in a lopsided 6-0 win.

"Unfortunately, when he was in Barrie he did really well," Clarke said before breaking into laughter. "He was first star that night. That's a tough pill to swallow, but I'm really proud of him and hopefully I can follow in his footsteps again and be there (on the national team) in a couple of years."

Sibling rivalry aside, Clarke can take pride he's considered one of the top under-18 defenders in the nation. Though it's unfortunate he won't be able to lace up the skates for Canada this summer after the 2020 Hlinka Gretzky Cup, scheduled to take place from Aug. 3-8 in Edmonton and Red Deer, Alta., was cancelled in April due to the COVID-19 pandemic.

"It's unfortunate that there won't be any tournament, but still being able to go on that Zoom call and hearing from all the people at Hockey Canada again for first time since November (under-16 tournament) will be enjoyable," the 17-year-old said. "Everyone's health and safety is first and foremost, so I understand. It is what it is."

Clarke is thrilled he's still on the Hockey Canada radar.

"I'm glad I'm still in the loop and they're still happy with how I've been progressing," said the Colts' fourth-overall pick last year, who recorded six goals and 38 points in just 57 as a rookie. "It's definitely a nice nod to achieve."

Clarke has been doing all he can during the pandemic to build on his impressive first year in the OHL. Up until June, he was doing home workouts with Graeme and younger sister Mackenzie in the family basement. This month, he started working out with trainer Tony Greco, along with his brother, Guelph Storm forward Pavel Gogolev, Jack Quinn of Ottawa, and Erie Otters forward Connor Lockhart.

"We all go to his backyard every Monday, Wednesday, Friday and sometimes Saturday to do a real hard workout," Clarke said. "I'm really grateful they have that setup and I'm also back on the ice lately. One of the rinks in Ottawa is open, but you still have to come fully dressed.

"Now that I'm back on the ice, I'm feeling pretty good. I'm ready to go whenever this ends and we can get back to Barrie."

When the OHL gets clearance from the provincial government and health organizations to return to the ice and a date is set to open training camps, Clarke will be embarking on his biggest year of hockey with this being his NHL draft year.

Already being touted as a top-five prospect for the 2021 NHL Draft, Clarke is gearing up for a big season with the Colts.

"Hopefully everything is regular timing for next season when the draft comes up," he said. "If not, we'll just play it by ear. Hopefully I can put myself in a good position. I feel like I've been working out really hard this summer, I barely had a break (after) the season.

"I want to start going hard in the gym again. I'm really ready for next season and whatever obstacles may arrive I'll be ready for them, and I'm ready if the coach wants to play me a lot. I feel like my cardio is where it needs to be right now, so I feel like I've put myself in a really good spot come September."

Colts interim head coach Todd Miller was thrilled the progress his young defender made over last season and says the best part is he's only begun to really show that huge potential.

"I think you saw the real Brandt Clarke the second half of the season," Miller said. "He went to a whole other level and he just seemed to be having fun."

The blue-liner was handed a much bigger role after key veterans like Tyler Tucker, Ryan Suzuki and Jason Willms were dealt away at the trade deadline in early January.

"When they all got dealt away my role increased and I felt ready to show what I could do, and I got a lot more confidence to jump in the rush," said Clarke, who is grateful for the confidence Miller showed in him. "I wasn't overthinking my plays. Just kind of simplify and make the smart play in that first decision. Yeah, as soon as that first goal came I was more dangerous around the net if I ever jumped in the rush. I got a goal against Kingston where I got a nice rebound goal.

"I felt really good and the coaching staff helped me out. (Colts assistant coach) Taylor Carnevale and I would work on my shot every practice. I was really happy with how my season ended up and I'm really looking forward to next season."

"He showed everybody in the second half of the season that, for his age, he's one of the top players in the world," Miller said.

Clarke is also excited how the Colts finished up last season before the pandemic forced the cancellation of the final two weeks and the playoffs. With the majority of the roster returning, he believes the young group can make some noise this season.

"I felt like we were heating up at the end of the season last year," he said. "We were in a good spot, set to go against Oshawa in the playoffs. It's unfortunate, the outcome. It would have been nice to get a couple of playoff games in and see how far we can go because we had a strong team.

"We kept telling everyone in the room that we can surprise people if this happens, but it's unfortunate that we didn't get the chance to prove ourselves. We have a lot of returning guys, everyone's getting better and I feel like we can contend for top in the East next year."

Colts don't have to look too far for new head coach
Sep 9, 2020 7:30 PM
Comments
We welcome your feedback and encourage you to share your thoughts. We ask that you be respectful of others and their points of view, refrain from personal attacks and stay on topic. To learn about our commenting policies and how we moderate, please read our Community Guidelines.