Coaches and officials went through training with new protocols implemented during pandemic, which include no spitting, no head balls and no throw-ins
Jul 22, 2020 7:00 PM By: Gene Pereira 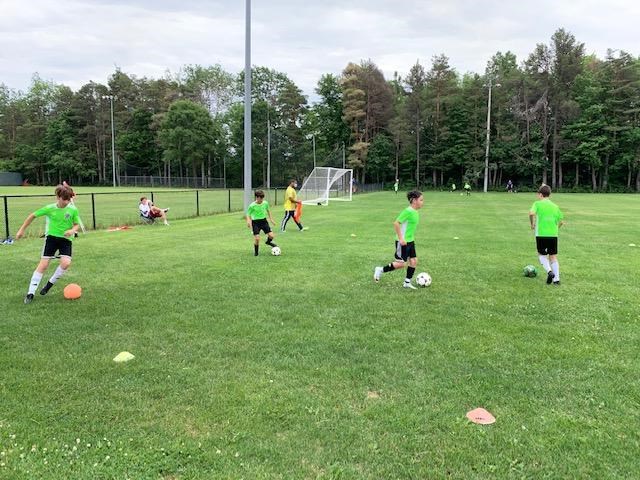 Seeing the smiles and hearing all the laughter on the soccer field, Michelle Gerdis knew the time and effort was well worth it.

The Barrie Soccer Club president, her staff and volunteers had prepared diligently for a possible return to the pitch this summer during a COVID-19 pandemic that had brought many sports and leagues to a screeching halt in mid-March.

The local soccer club received some great news at the beginning of July when they received Phase 1 guidelines from Ontario Soccer allowing them to take to the field to work on skills and various activities.

"Definitely, the first couple of weeks you see the kids come back on the pitch it was so rewarding," said Gerdis, who credits BSC's technical director Mark Cristante with putting together the on-field activities. "There were so many smiles and getting to watch them interact with all their friends again after being months of cooped up inside, it definitely made all the work we put into this very worth it."

Those smiles grew bigger and the laughter louder this week when the local club was able to return to game action Monday after receiving the new Phase 2 guidelines from Ontario Soccer.

With games within the club now allowed, the Barrie Soccer Club can get its house league back up and running with actual game action.

"This has been a difficult time for everyone," Gerdis told BarrieToday. "The kids not being able to go to school and see their friends and parents being laid off, and all businesses being forced to close their doors."

The Barrie Soccer Club is the only soccer club in the Huronia District to currently have a house-league program. Their rep and development programs have been growing because they've been accepting players from other Huronia clubs who have been shut down for the season.

With rep and development players not allowed to travel until Phase 3 of Ontario Soccer, the Barrie club is also working on a plan to build an interclub league and tournament that would allow them to get some game action.

"We were unsure if we would have a season at all, would we even get authorization from Ontario Soccer " Gerdis said of the effort to get on the field. "But we wanted to really promote healthy living and soccer for the kids, so we tried our best to stay open as long as we could."

As soon as Ontario Soccer came out with their guidelines, the club held meetings with coaches, parents, staff, and board members. Gerdis says all this only made the club stronger, because it allowed them to collaborate together, develop and execute their return to play program.

"We are so glad we did because we have been playing five weeks now and we're the first club in the region to return to play, so it's been huge," she said. "I think the kids are ecstatic to be out of the house and I think the parents are happy that they're not in there playing video games anymore, so it's been a win-win."

Safety, of course, comes first. With a medical background, Gerdis was able to look over the guidelines with a medical perspective to really ensure they were being safe and doing everything they could to ensure not just the kids, but the parents and the coaches.

Coaches and officials went through training with the new protocols implemented during the pandemic, which include no spitting, no head balls and no throw-ins.

"We implemented extra steps," she said. "We got the parents to bring hand sanitizer for their kids, so they'd be doing it before coming on the field, at water breaks and again afterwards. I think we've looked into all facets and when we shared our ... plan with the parents, I feel like it gave them a lot of relief because it seemed to have covered everything.

"We haven't had many hiccups at all. We had a few in the first week, they were so minor and easily fixed within 30 minutes of having it brought to our attention. We've been really, really lucky to have had such a great team to put this together and collaborate with."

Before Phase 1, Barrie Soccer Club coaches were doing virtual training with rep players to keep them involved and active.

"Getting things up and running was a massive collaboration between so many people and a lot of people stepped up," Gerdis said.

Cristante created the curriculum for various house league divisions during Phase 1, putting into place a safe plan that got kids back on the field at the beginning of July.

"Everything had to be done with social distancing, so he created these plans with that in mind that when the coaches — they're all volunteers — went on to the field they had no issues at all implementing this," Gerdis explained. "Then we had technical staff on the field to assist the coaches and then field marshals watching and helping the parents to keep reminding them for social distancing."

While registration numbers weren't as high in years past heading into this season, Gerdis says kids are still coming through. With the aim to accommodate as many players as possible, the club has left its house-league registration open and are still welcoming rep and development players, including those from surrounding clubs that have been shut down in the region.

"Restrictions have lifted a bit more and people are becoming more comfortable, and we're still getting registrations daily asking to be put out on the field," she said. "Everyone has got their own comfort levels, so we'll do our best to accommodate everyone.

"We're just going to do what we can and that's just keep our registration open for everyone."

The local soccer club also recently announced its partnership with the 1812 FC Barrie professional team. The expansion club will compete in League1 Ontario beginning in September 2021.

"Our under-21s will also get the opportunity to play for the reserves for the pros," Gerdis said. "We're definitely looking forward to that partnership."

The Barrie Soccer Club will also be running three week-long camps (July 27-31, Aug. 10-14 and Aug. 24-28) this summer. For more information on signing up for house league play or any of the programs, visit the website at barriefc.ca.

Seeing the kids enjoying themselves on the soccer field is good for all of us during these trying times, believes Gerdis.

"It's just so good for the heart in all aspects really," she said.