'I feel younger than my kids'

City’s 55+ Centres offer the young-at-heart an opportunity to get out and about and make a difference in each other's lives
Feb 4, 2020 12:30 PM By: Ian McInroy 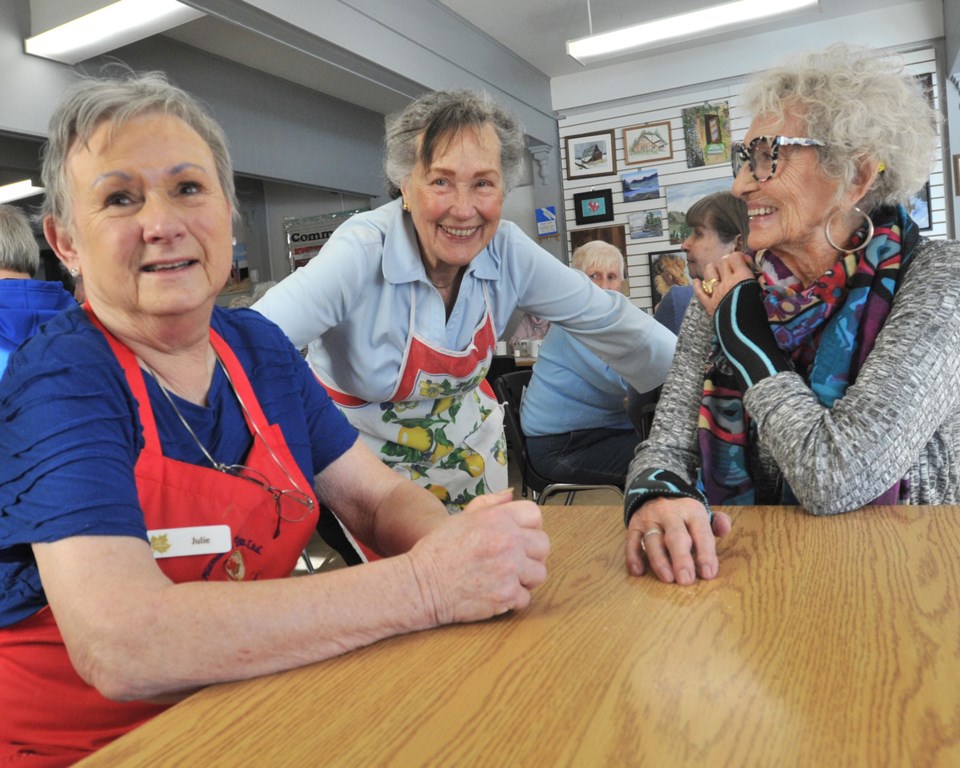 The City of Barrie's 55+ Centres offer a variety of recreation activities for seniors with the help of volunteers like Julie Youell-Robson, left, and Esther Peolini, centre. Jeani McFadyen, at right, is thrilled with the programs and has also enjoyed volunteering her time. Ian McInroy for BarrieToday
They talk and they listen and they embrace each other's lives.

Not online, not Twitter and not Facebook; in the real world, there is camaraderie aplenty for the more mature crowd and they can find it everywhere: with their families, friends, on the street or in places where they are welcome.

Or they can find it by opening a door.

Julie Youell-Robson found it by dropping by the City of Barrie’s Parkview Community Centre seven years ago. She’s been volunteering at the city’s east-end facility ever since.

Who better to listen to a senior’s story than another senior?

Along with Parkview and the Allandale Recreation Centre, the city’s 55+ Centres offer the young-at-heart an opportunity to get out and about and make a difference in each other's lives.

Youell-Robson volunteers between 300 and 500 hours a year — she’s also on the 55+ advisory committee — and she wouldn’t have it any other way.

“I love what I do. It’s always busy and we have a full day,” she says, while a nearby room is bustling with chatter after a lunchtime meal.

“It’s a big extended family and they are all part of our lives one way or another.”

Jeani McFadyen, who doesn’t look at all like she turned 89 on Sunday, has been coming to Parkview for about 20 years. She has also picked up the volunteering bug during that time.

“I usually feel younger than that, it depends on the day but the body doesn’t always co-operate all the time,” she says with a chuckle. “I live for this place; I don’t know what I’d do without it.

“You’ll see people sitting here and reading quietly and just enjoying being here and just having somewhere to go: I’d say it’s like a job but it isn’t like a job. It gets you out there; otherwise I’d be at home watching television, or Suduku, knitting, crocheting or talking.”

City recreation programmer Jessica Gourlie says more than 800 men and women have +55 memberships and there is also drop-in participation as well.

“Our numbers continue to steadily grow as the community changes and the number of older adults living in our community grows,” she says.

Youell-Robson says she enjoys being a part of the positive social scene.

“I find being around the people to be so rewarding. If I haven’t seen them for awhile I’ll say, ‘We’ll what’s going on with so-and-so or have you seen so-and-so’,” she says. “It’s a friendly and welcoming ‘come-and-join-us’ type of place. We are definitely improving peoples’ lives here.”

McFadyen nods her head in agreement.

“I feel younger than my kids. I’ve got two boys and they’re sitting there quietly and I’m just yakking away.”

City's 55+ centres about making friends and keeping active
Mar 3, 2020 11:30 AM
Comments
We welcome your feedback and encourage you to share your thoughts. We ask that you be respectful of others and their points of view, refrain from personal attacks and stay on topic. To learn about our commenting policies and how we moderate, please read our Community Guidelines.