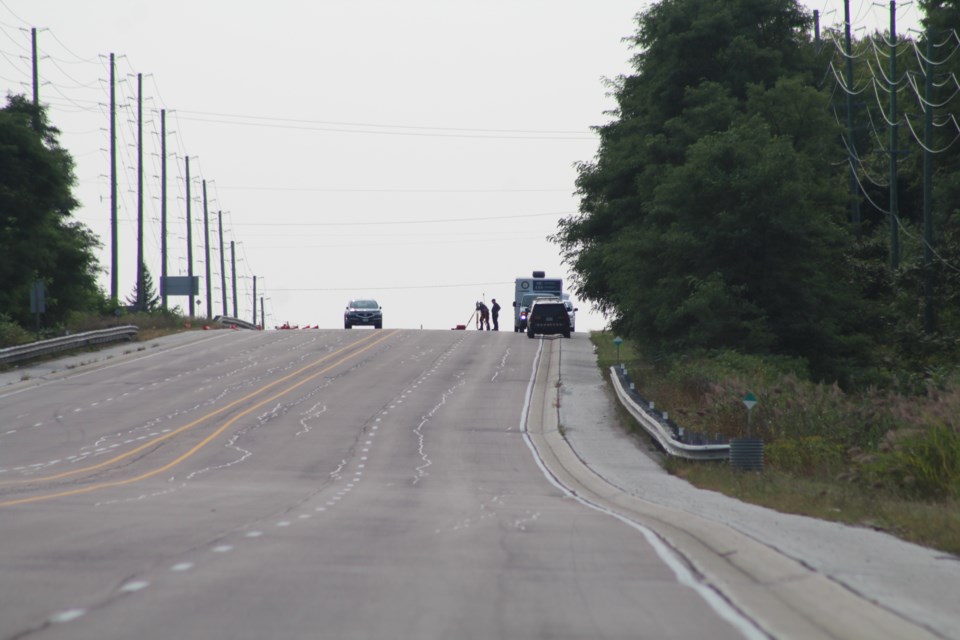 The Special Investigations Unit collects evidence at the scene of a fatality on Bayfield Street/Highway 26 in this file photo from Sept. 16. Raymond Bowe/BarrieToday

SPRINGWATER TWP. — Provincial police continue to investigate, but no charges have been laid, after a woman was struck and killed by a vehicle while walking along Highway 26 just outside Barrie last week.

On Sept. 15, at approximately 10:48 p.m., officers responded to reports of a woman with a dog walking on Bayfield Street North/Highway 26 near the Barrie city limits.

The woman was wearing what police described as orange- or red-coloured clothing and waving at vehicles.

They attempted to provide first-aid, but were unsuccessful in saving the woman's life.

She was transported to local hospital by Simcoe County paramedics where she was pronounced deceased.

The woman has since been identified as Venessa Murphy, 29, of Clearview Township.

The dog was found dead off the road.

The initial investigation determined Murphy had been struck by a vehicle that failed to remain at the scene.

Huronia West OPP officers, under the direction of the Criminal Investigation Branch (CIB), launched an investigation.

OPP Sgt. Jason Folz said investigators have determined that a police vehicle was not involved in the crash.

"I believe there was an undercover police car that was first on the scene there, which is why the CIB was engaged initially, just so they can decide whether there was wrongdoing there or not, which there was not," Folz told BarrieToday.

Last week, provincial police said they had identified the vehicle and driver involved in the deadly crash. However, no charges have been laid and the investigation is ongoing. No details about the vehicle or driver have been released, either.

"They're looking certainly at persons of interest ... but they haven't made an arrest yet," Folz said Wednesday. "It's not unusual when they're investigating (an incident) like that."

Due to the police involvement, the Special Investigations Unit (SIU) is also conducting a concurrent investigation. The independent civilian agency — which investigates incidents involving police where there has been death, serious injury or allegations of sexual assault — has assigned five investigators and three forensic investigators to the case.

BarrieToday reached out to the SIU for an update today, but a message was not returned before the time of publication.