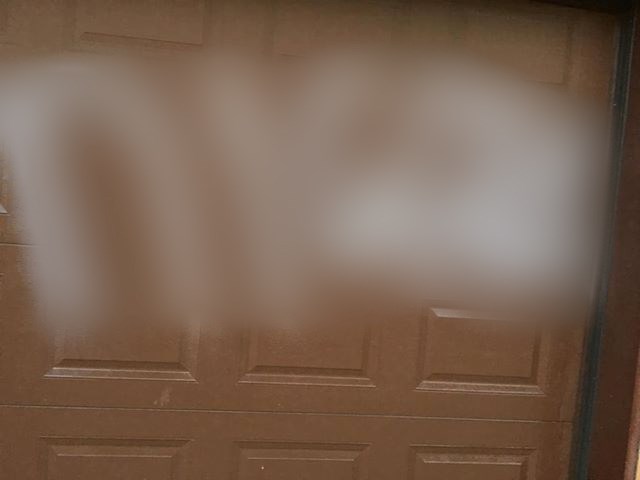 This image, which has been blurred, shows the racial slur spray painted on the garage door of a group home. Supplied photo

An employee at a Collingwood group home remains hurt and scared today after someone spray-painted a racist slur on the garage door where she works.

Sonia Johnson, a black woman from Toronto who works in Collingwood, spent the night working at the group home. This morning around 7 a.m., a resident coming back from Tim Hortons noticed the graffiti on the garage door.

"The word 'n****r' was spray-painted on the garage door and on my manager's car," said Johnson.

Police have been called and are investigating, but Collingwood-Blue Mountains OPP have not yet commented on the investigation.

Johnson said her manager's car was parked about a block away. Her manager is white.

She said she was very surprised something like this happened in Collingwood.

"I was very hurt. I cried," she said upon first discovering the graffiti. "The neighbours came over and apologized and hugged me and we cried together."

She said the neighbours told her Collingwood was a diverse community and they were shocked to see the racist slur painted across the door.

"I'm still hurt and a little bit scared because I don't know who did it," said Johnson, adding it's the first time it's happened at the group home.

"I thought it was a safe neighbourhood."

Cyclist in critical condition after being found in Innisfil ditch
Jul 13, 2020 11:33 AM