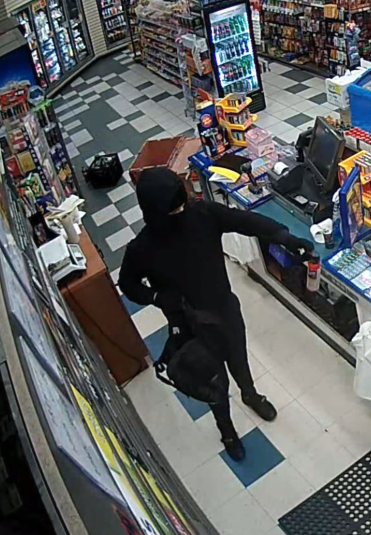 After robbing the store, the suspect fled on foot with an undisclosed amount of Canadian currency and cigarettes.

From the description of the suspect, which was provided by the store clerk and confirmed by on site video surveillance equipment, it has been determined that this person is the same person who robbed the Circle K Convenience Store located at 353 Duckworth Street on Wednesday, April 10, 2019 at 4:51 a.m.

Again, the suspect entered the store armed with what appears to be a bear repellent-type spray product and this time actually discharged it striking the on-duty clerk. The clerk was not seriously injured, but was incapacitated for a short time until the effects of the spray wore off.

The suspect being sought in both of these robberies is described as:

Police have noticed that the readily identifiable red bandana that the suspect wore in the area of his left hip in the last robbery was not worn this time.

The Barrie Police Service is asking anyone with information on this robbery to contact Barrie Police Investigative Services at 705-725-7025, ext. 2741, to contact Crime Stoppers at 1-800-222-TIPS (8477) or leave an anonymous tip online at www.p3tips.com.