'I was embarrassed that this was in my community and if I had a can of spray-paint on me I’d have dealt with it immediately,' says resident
Apr 11, 2021 2:17 PM By: Nikki Cole 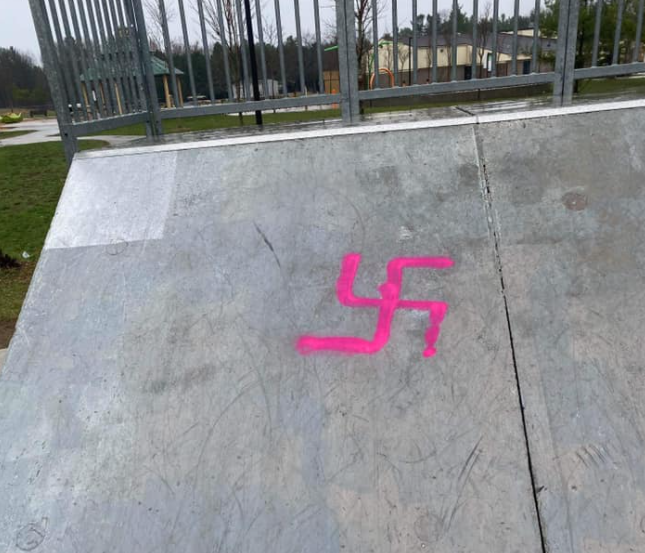 A Barrie resident out for a walk came across this racist and hateful graffiti, as well as another racist epithet and sexual imagery, at the Lampman Lane skate park.Image supplied

Glenn Pearson, a teacher at Bear Creek Secondary School, was out for a walk Sunday morning when he came across the graffiti at the Lampman Lane skate park, located in the Letitia Heights neighbourhood.

The person responsible used bright pink spray-paint to leave the hateful messages, which included the N-word in large letters across one of the ramps. There was also a swastika and sexual imagery.

“I always walk by the skate park and it was very visible from a distance. I was quite disgusted and shocked when I saw it,” Pearson said. “It’s in a park where children are around.

"I was embarrassed that this was in my community and if I had a can of spray paint on me I’d have dealt with it immediately," Pearson added.

Pearson reported it to Barrie police as well as the parks and recreation department’s graffiti abatement program. Mayor Jeff Lehman was also copied on the message reporting the incident.

“I haven’t been on that route much recently, so I’m not sure how long it’s been there, but I hope it hasn’t been like that for long, because it shouldn’t be there at all," Pearson said.

Pearson told BarrieToday the email response he received from the city was they intended on dispatching their after-hours emergency response team to remove the graffiti.

“I don’t know if they’ll get to it today, but hopefully it is dealt with today," he said.

Pearson also informed UPlift Black president Shelly Skinner, who told BarrieToday she’s extremely concerned about the impact this type of hate can have on young people.

“It’s already so hard for these youth right now who are home (and) isolated during a lockdown. Sometimes the only way they can get out is to jump on their skateboards and head to the skate park… and that’s not even a safe thing if you’re Black or Jewish? It’s just really unfortunate,” Skinner said Sunday.

When she first came to Barrie, Skinner said she was shocked by how extreme the racism is here.

“I grew up in the GTA and experienced racial violence there, but never to the extent of what we see here. There are a lot of us working really hard to make a change… and to eradicate this kind of (scourge) on our skate park as soon as possible," she said.

Barrie police are investigating the incident.

About the Author: Nikki Cole

Nikki Cole has been a community issues reporter for BarrieToday since February, 2021
Read more