Police say Feb. 24 incident wasn't a targeted, criminal act but rather an immature prank; Teens did not realize the impact of their actions
May 7, 2020 2:05 PM By: BarrieToday Staff 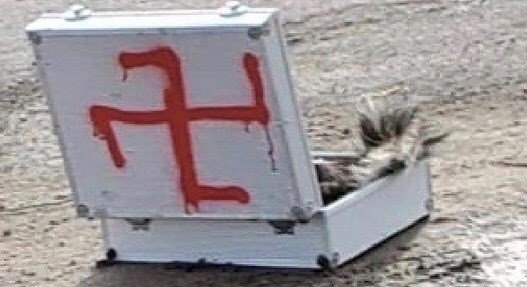 NEWS RELEASE
SOUTH SIMCOE POLICE SERVICE
*************************
South Simcoe Police Service officers have identified the culprits responsible for what has been deemed to be an isolated, appalling prank.

On Monday, Feb. 24, 2020, around 4:30 p.m., South Simcoe Police Service officers were called to the intersection of Corner Avenue and Killarney Beach Road in Innisfil after an animal carcass was discovered inside an open briefcase with an anti-Semitic symbol painted on the lid.

The package was removed by Town of Innisfil employees for disposal.

Following a detailed investigation, which included an extensive canvass for witnesses and surveillance camera video, officers identified the three teenagers involved in the incident.

Police determined it was not a targeted, criminal act but an immature prank where the teens did not realize the full impact of their actions.

The animal involved was roadkill and deceased prior to the incident.

Police spoke to the parents and the teens who were cautioned about the gravity of their behaviour.

South Simcoe Police Service wants to thank the many residents who assisted us with this investigation. As a result of thorough police work and help from the community, officers were able to put to rest the concerns this incident raised in the area.