$875 worth of scotch stolen from Caplan Avenue LCBO 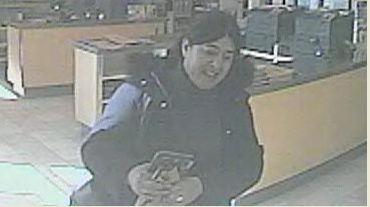 On Monday, March 8, 2019, Barrie police say a female attended the LCBO located on Caplan Avenue and stole six bottles of very expensive scotch. Photo supplied
NEWS RELEASE
BARRIE POLICE SERVICE
*************************
The Barrie Police Service is appealing to the public for assistance after a theft was reported in the City of Barrie.

On Monday, March 8, 2019, at 1:18 p.m., a female attended the LCBO located on Caplan Avenue and stole six bottles of very expensive scotch. She then left the store after purchasing three other canned products that she had selected. The theft was only determined after empty cardboard tubes that the stolen bottles came in were located a short time later.

When the store video surveillance system was reviewed, it was very quickly determined how the entire theft was carried out and a picture was provided to police that clearly showed who was responsible.

The suspect is described as female, white, short with dark hair, dark jacket with fur trimmed hood, dark pants and dark shoes. She carried a large purse which was used to conceal five bottles of Macallan Classic Cut and a single bottle of Benriach Peated Cask.

The alcohol taken is valued at just under $875.

Anyone with information on this theft is asked to contact Constable Osborne of the Barrie Police Service at 705-725-7025, ext. 2783 or by email at bosborne@barriepolice.ca. You can also contact Crime Stoppers at 1-800-222-TIPS (8477), or leave an anonymous tip online at www.p3tips.com.

Woman identified in fatal pedestrian collision in Alliston
Feb 20, 2020 11:37 AM