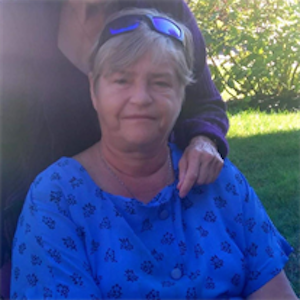 Julie Dawn Mann (Weaver), 58, of Barrie, Ontario, passed peacefully at Coleman Care Centre, Barrie, on October 24, 2016. She was born on October 11, 1958, in Toronto to Barbara Green and Lelland Weaver and is survived by her loving husband Harry, her two children Scott Wilhelm and Jennifer Mann, aunt Maryland Turner, her brother and sister Sean and Cheryl Weaver, and beloved granddaughter, Charlotte.

Julie had been grieving the loss of her youngest daughter, Stephanie, who passed away on October 3, 2016. Those closest to Julie said that she hadn’t been the same since Stephanie’s passing. She had also been battling Huntington’s disease and Myotonic Dystrophy in her adult years. The doctors said her passing was quick and painless, with a smile on her face when they found her peacefully resting. Julie’s battle with Huntington’s had always scared her. She stated numerous times that she would not let the disease run its course — that she wanted to pass away on her own terms — and that she did.

Julie was a natural caregiver and a tender soft soul. She would never let anyone get in the way of the compassion and empathy she showed for everyone she met. It was completely normal to have Scott or Jenn’s friends living in the spare bedroom. She never turned away anyone in need of a hot meal and a warm bed. She absolutely loved her pets, loved to cook, adored all her family and cherished family time, with Christmas being her favourite holiday. Julie had some challenges in life but refused to let rob her of her sympathetic personality. In her latter years, one could always find Julie drinking coffee and reading a book outside, enjoying nature. Julie will be greatly missed by so many. Friends and family will be received at the Steckley-Gooderham Funeral Home, 201 Minet’s Point Road, Barrie, on Thursday, October 27, 2016 from 3 pm until the time of the service at 5pm. Online memories and condolences may be forwarded through www.steckleygooderham.com.