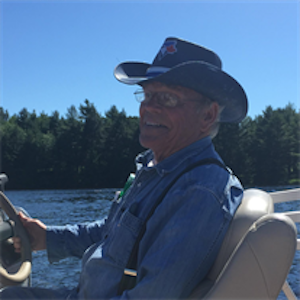 It is with great sadness that we announce the passing of Chuck Johnston, in his 79th year. After a courageous battle with cancer, he left us peacefully at Hospice Simcoe on Saturday, September 30th with his family by his side. Beloved husband for 55 years to Carole (Ware). Beloved father of Laura (Don Hinde), Larry (Tracey) and Len (Brenda). Loving Grandpa to Ashley & T.J. (LeClair), Kelsey (Zak) & Amanda, Nicole, Sara & Matt. He will also be missed by his dog Maggie and his many nieces and nephews. Chuck was a successful entrepreneur his entire life. After moving to Barrie in 1974 he opened Johnston's Esso at the corner of Bayfield and Ross in Barrie from 1980 to 1995. During that time he built the business to 5 Esso Service Stations in the area. After that, his next venture was Magnet Signs. A company he was involved with from its inception. Chuck and Carole's second home was their cottage in Walkers Point on Lake Muskoka. They built a special place where the whole family went regularly and became the close family that we are. You could always find him up the hill checking his trail cams, feeding the deer, cutting wood or just puttering around in his shed. It won't be the same without him. They spent winters in Florida where they made many great friends and special memories. Chuck also loved to hunt and fish at his hunt camps in Bala and Lake Abitibi. In between all that, they also found time to travel in their motor home. Visitation will take place at the Steckley-Gooderham Funeral Home, 30 Worsley St., Barrie on Wednesday, October 4, 2017 from 2-4 pm and 7-9 pm, with Chuck’s life being celebrated in the Chapel on on Thursday, October 5 at 1 pm. Following the services, guests are invited to remain for a reception luncheon in the Lounge. The family would like to take this opportunity to extend their heartfelt thanks to Dr. Fred Strangway for his care and compassion during this tough time, the staff and volunteers at Hospice Simcoe, and especially to the nursing staff who really are angels. In lieu of flowers, donations can be made to Hospice Simcoe or the RVH Cancer Care Centre.