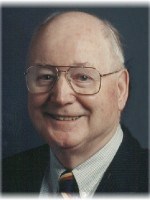 Passed away peacefully at Woods Park Care Centre, Barrie on Friday, February 26, 2016 at the age of 91. Loving husband of Gene Barnett. Loving father of Linda (Roger) Beun, Carol (Mark) Tonkin, Kay (Larry) Maw, and Donald (Angele) Barnett. Cherished Grandad of Christopher, Jonathan, Sarah, Kyla, Michael, Kerrie, Cindy, Jamie, Becki and Alice, and great-grandad to fourteen. Brother to Joan Veale (England). Predeceased by his parents Amelia and William and his brother Charlie. Jack was a Veteran of WW11, with the R.A. F., Squadron 218 “Gold Coast,” serving as a wireless operator in the Lancaster bomber. He was proud of his participation in “Operation Manna” in which his Squadron dropped food parcels to feed the people of Holland at the end of the war. He was an avid singer, was a dedicated member of the Parkview Singers and often took the lead role in Gilbert and Sullivan operettas the most memorable being his role as Chief of Police in The Pirates of Penzance. Jack will be missed by many. He was a loving family man with a sharp wit and an insatiable need to make people laugh. He had a joke, poem, song or story for every occasion. Friends may call at ADAMS FUNERAL HOME (445 St. Vincent Street, Barrie) on Thursday, March 3, 2016 from 1p.m. until the time of Memorial Service in the Chapel at 2 o’clock p.m. Reception to follow. Memorial donations to the Heart and Stroke Foundation or the Canadian Diabetes Association would be appreciated. Messages of condolence may be forwarded to the family through adamsfuneralhome.ca