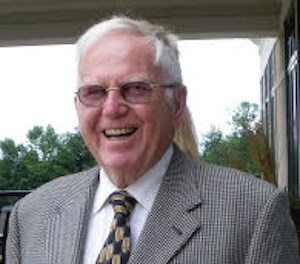 Russell Ambrose Hinds, father, grandfather and husband died surrounded by family on December 19, 2015 after a courageous battle with Alzheimer’s. He was predeceased by his parents Maretta Anna Hinds (née Quinlan) and Stanislaus Bernard Hinds, by his first wife Mary A. Hinds (née Vincer), mother of his four children, and by siblings Margaret Macdonald and Francis Hinds. Russell is survived by his sister Jane Harrington, his wife Joan Hinds (née Lester) and his children Catharine (husband Howard Hepburn), Sean (children Matthew, Christopher, and Kaitlin), Meegan (husband Marc Létourneau, children Zoé and Sasha) and Sarah (husband Antony Caruso, children Jordan and Ariel). Russell was born March 9, 1923, in Barrie, Ontario. He will be remembered for his profound love of family, his storytelling, his infectious laugh and his passion for reading and education. After working as a general contractor in construction, Russell returned to the University of Toronto, earned a Masters in Education and launched his career as an educator. Russell was instrumental in the establishment of the Ontario Community College System in the 1960s, working at two of the first community colleges in Ontario and at the Ministry of Education. After retirement, he moved as a consultant to Abu Dhabi and helped that country establish its own higher- education system. From Abu Dhabi, Joan and Russell were able to travel the world extensively, enjoying the opportunity to learn about other cultures. Russell’s life will be celebrated with a Mass at St. Mary’s Roman Catholic Church, 65 Amelia Street, Barrie, Ontario on December 28, 2015 at 10:00 am followed by a private family internment ceremony. There will be a gathering at St. Mary’s Church from 9:30 until time of Funeral Mass at 10:00. The family wishes to thank Bradford Valley Long Term Care for their gentle care of Russell. Condolences can be made online through adamsfuneralhome.ca. In lieu of flowers, we encourage donations be made in the charity of your choice or to the Alzheimer Society of Canada (alzheimer.ca).