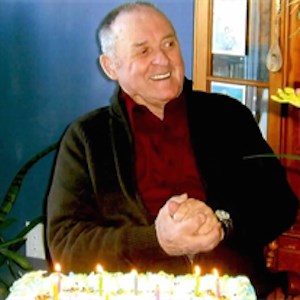 1929 – 2015
Passed away peacefully on the morning of December 23, 2015 at the Park Lane Terrace in Paris, Ontario. He was born in Hamilton, Ontario February 3, 1929, the son of the late Russ and Rosalie Dinsmore, He was predeceased by his loving wife of 54 years Lois Jean (nee Dobson) who passed away in 2003, his son Robert John, loving daughter-in-law Sheila, eight brothers and four sisters. He is survived by his five sons Doug (Judy) of Rockland, Jerry (late Sheila) of Paris, Ted of Paris, Dell of London and Randy (Wendy) of Minesing, seven grandsons, four granddaughters, ten great grandchildren and one great great-grandchild, many nephews, nieces and their children. He is also survived by his sister Grace and brother Dennis. He was a loving father, grandfather, great grandfather and great-great grandfather. His hobbies were fishing, market gardening, chicken farmer and silhouette maker. A special thanks to the staff at Park Lane Terrace for their loving care and patience. Family and friends will be received at the Steckley-Gooderham Funeral Home, 30 Worsley Street Barrie, on Tuesday December 29th from 7-9pm. A service will be held in the chapel on Wednesday December 30th at 1pm. Interment to follow at Grenfel Cemetery, Sunnidale Road. A light lunch will be held at the Grenfel Community Centre, after the interment. Online condolences and memories may be forwarded through www.steckleygooderham.com