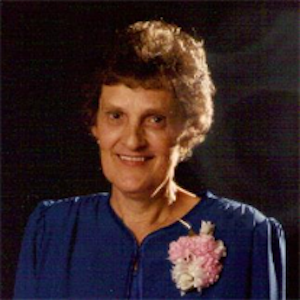 Helen Marie Burke passed away peacefully on Wednesday, February 24th, 2016, after a long and courageous battle with COPD. She was in her 87th year. Helen was born on May 21, 1929 in Toronto, Ontario to parents Alfred and Eliza Mandley. At last, she is reunited with her husband Robert James Burke (1970), and her daughter Carol Lynne (2009). She will be sadly missed by her daughter Barbara, and sons, Butch (Donna), Tom (Joann), Ed, Donald, and John (Leona). Helen was blessed with a large family which also included 11 grandchildren and 19 great-grandchildren, who will always remember her waving goodbye at the window as you left her home.

Helen had 14 brothers and sisters: Clarence, Joe, Ted, Ray, Ken, Fred, Gord, Hazel, Eileen, Edna, Elva, Jean, Betty and Shirley. Helen was from Toronto, then moved to Aurora where she an employee at the Aurora High School, where she retired in 1995. She had many fond memories working there. Helen then moved to Barrie where she spent her daughter Carol's last remaining years, together. Family and friends will be received at the Steckley-Gooderham Funeral Home, 30 Worsley Street, Barrie, on Saturday, March 5th, 2016 from 11 am until time of funeral service in the chapel at 12pm. Donations to the Heart and Stroke Foundation or the Parkinson's Society of Canada would be greatly appreciated by the family. Memories and condolences may be forwarded to the family through www.steckleygooderham.com.