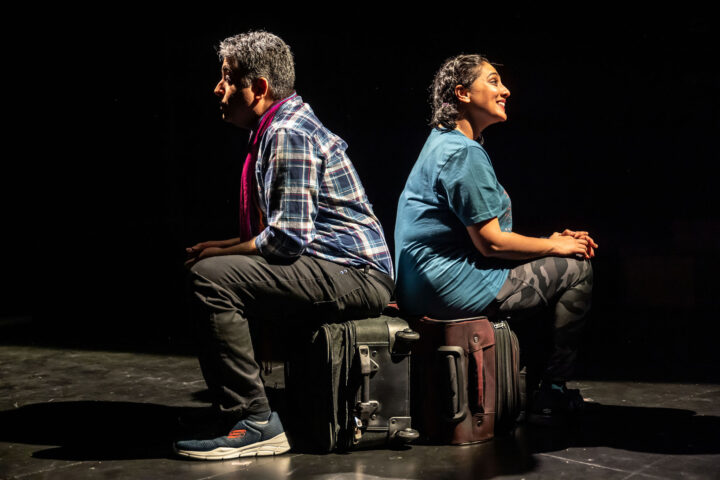 For anyone who’s had to suffer through cumbersome waiting periods and unresponsive helplines while dealing with Immigration Canada, a new play titled An IMM Permanent Resident will resonate heavily.

Directed by Miquelon Rodriguez, the play, written and acted out by married duo Himanshu Sitlani and Neha Poduval, looks at the couple’s struggle as Poduval tries to obtain permanent residence status while jumping through endless bureaucratic hoops throughout the process.

“Writing this experience as a play wasn’t planned. It all started when Poduval, who was on her visitor visa and waiting for her PR, was getting frustrated because there was nothing for her to do,” says Sitlani.

“To keep herself busy, she joined a free writing workshop hosted at the Toronto Library, and that’s where she wrote about her experience and it got published, and we thought there is more to this.”

The duo then turned Poduval’s original two-pager into a play. Sitlani, who worked extensively as a theatre artist in his native Mumbai, India, was lucky to get a Toronto Arts Council grant as a new newcomer artist.

“Thanks to the grant, I was able to take time off from work to actively explore doing theatre in Canada,” he says.

Sitlani and Poduval are co-founders of Toronto based theatre company Nautanki Bazaar, which produced the play as part of RISER Toronto 2022. RISER is a collaborative producing model for performance artists and companies to create and present new work. It’s developed by the famed Why Not Theatre, led by award-winning Toronto-based stage director Ravi Jain.

Beat down by the system

The play documents how Poduval agonized over leaving a good life in India to move to Toronto to join Sitlani, as well as the excitement of beginning a new life in a city where they could run into Toronto native worldwide icon Drake.

It also looks at the more somber parts, which would end in her waiting to hear back about her residency while having to get used to Sitlani’s punishing night shift schedules.

In one scene, the duo captures the dismissive manner in which the immigration helpline people deal with errors that would lead to the rejection of Poduval’s application, subjecting the couple to an absurd and outdated system.

“The first time, it wasn’t specified, but we actually had to fill out details of our entire courtship period and wedding rituals to prove we were married. That itself was five pages which you are supposed to attach separately,” says Sitlani.

Unable to hire an immigration lawyer to do the paperwork because of the high cost, they decided to contact a settlement worker at a newcomer services agency and submitted their forms one more time. Unfortunately, they were again told that because there was a change in government, new and updated forms would have to be filled, and their forms were sent back once again, much to Sitlani’s frustration.

“I got a notice saying that I hadn’t attached my employment letter. It was right there, attached to the first page of the form, and so I called the CIC helpline, which took three hours to get through to, and the person said, ‘Oh, they must have missed it. Just resend,’” he recalls.

Irked by this flippant attitude and not wanting to take any more chances, Sitlani made an exhaustive index of all the materials that were attached to the application form.

“It was like I had to explain to a five year old which pages had what documents,” he says.

Sitlani and Poduval have ample company in their frustration. Immigration, Refugees and Citizenship Canada (IRCC) is facing an overwhelming backlog of more than two million applications in all immigration categories. Lack of communication and information about processing times has made the situation more aggravating for applicants.

According to a CTV News report, the processing time for an applicant’s first PR card currently stands at 99 days, while renewing or replacing a PR card will take 70 days. And sponsoring a spouse or common law partner living inside Canada could take up to 15 months, and 22 months for those outside.

However, the final scene of the play ends on a hopeful note: Poduval has just received a notification on her phone from Immigration Canada, and from their smiles, the audience understands she finally received her PR (she received it in 2018).

But for Sitlani, the wait is not over, as he is now waiting on his new PR card, which so far has taken eight weeks since he sent in his reapplication form with no word from the government. He says he hopes it is not lost in the mail, which is “also known to happen.”

“There’s no proper helpline, and even if you call them they will tell you they don’t know what the process is,” says Sitlani.

“You just have to wait. How long do you wait?”

When there are changes in the market, who should you really be listening to?