‘My Two Voices’ is a poetic reflection on immigrant identity

The film's director purposefully avoids the subjects’ faces in order to keep viewers' attention on their tone and memories of past experiences.
New Canadian Media May 10, 2022 1:04 PM May 10, 2022 1:05 PM 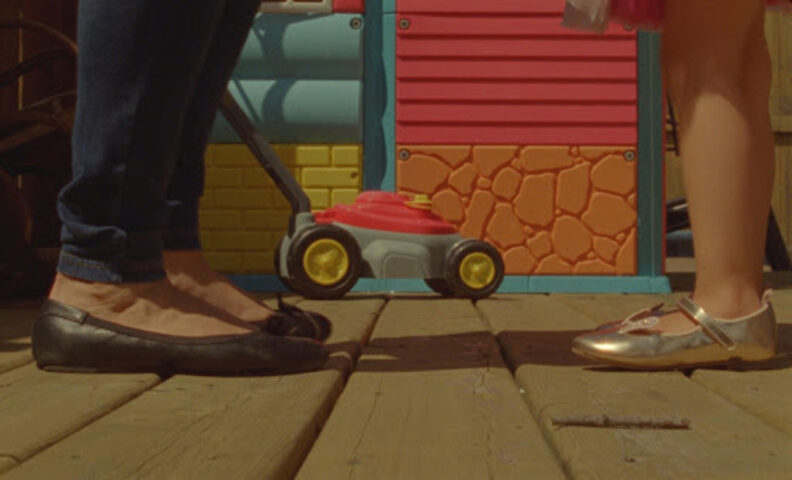 Claudia, Ana and Marinela are three Latin American women who share their intimate experiences of immigrating to Canada while reflecting on themes of violence, belonging, motherhood, and reconciliation. The Colombian Canadian filmmaker Lina Rodriguez carefully framed close-ups of their hands and bodies when they are doing duties at home and taking care of their kids.

“I wanted to celebrate their respective journeys as immigrants and women, as well as to highlight their tireless labour – most of the time invisible – at their jobs and at home, which serves as a key anchor for their families and our community as a whole,” Rodriguez says in an interview with New Canadian Media.

The cinematographic narrative of this documentary, which avoids showing the subjects’ faces, keeps the audience’s attention on their tones of voice and their memories of past experiences, permeated with displacement, domestic violence and abandonment.

Speaking before her Canadian premiere at Hot Docs, the Colombian filmmaker explains that she wanted to focus on the “very cadence of their voices, their gestures, and on the objects, textures, and sounds of their everyday lives as a strategy to trace their respective biographies and journeys.”

The filmmaker explains that she uses cinema to express what she calls the “in-between territory” that immigrants inhabit. “Some people say that when you leave ‘home’ you never quite leave and never quite arrive, that you are more suspended in between simultaneous times and spaces.”

No matter the number of years in Canada or their Canadian citizenship, Claudia, Ana and Marinela share their feelings of being included and feeling apart. Rodriguez is entirely connected with her subjects because she is also an immigrant.

“In my everyday life, I may feel that I have a place here in Toronto; the next moment someone may make a joke or say a word that I don’t understand, which automatically makes me feel like I’m here but not here,” she says.

“Nothing is settled anyway, we are all constantly moving and changing.”

My Two Voices premiered in Berlin a few weeks ago. In Toronto, it was presented as part of the Canadian Spectrum program and a film that creates “an impressionistic tapestry that resists a centralized perspective and echoes the protagonists’ fragmented and hybrid identities.”

Claudia, a settlement worker who arrived in Toronto 18 years ago, recalls in the film how in her native Medellin, Colombia, she survived an attack by Pablo Escobar, the country’s biggest drug lord.

After her participation in the film, the mother of three and also the president of Colombian Cultural House, said that this experience made her think about the “inner struggle to fit into a new society without losing self-worth and endearing connections to our roots.” For her, this film made her reflect on the “duality and the process of reconciliation between who I was and who I am.”

The movie is a “tribute to the immigrant who in a distant land and in strange languages struggles to find his/her identity in the midst of diversity, adversity and opportunity,” said Claudia in an interview with NCM.

Ana is an immigrant from Mexico. In the film, she recalls her difficult times dealing with an abusive husband and a child with special needs. Now, with a new husband and a second child, she points out how differently the public reacts when she presents herself as an immigrant or as a wife of a Canadian man.

She explained that her identity was transformed when she arrived in Canada and she had to learn many new things.

“Now I feel that I have two identities because here I use my husband’s last name but in Mexico, I use my own last name,” she says.

“For me, my two voices are my two cultures (Mexican-Canadian), two languages (English-Spanish) and the challenges that it implies,.”

She added that she felt “liberated” by sharing a part of her story along with the stories of Claudia and Marinela.

For Marinela, her sense of identity is even more complex because she was born in Canada but was sent back to Colombia at the age of four. Her return to Canada as an adult has left her with the rare experience of relearning a place she once knew.

In My Two Voices, the director avoids giving more details about their names, dates or background. She presents them in their present, surrounded by their belongings and everyday life, while cautiously opening up to their past.

“I approach filmmaking as a human activity. I don’t see filming as a tool for me to get what I want and extract or take things from others. I try to think about it as an encounter around the camera, as a way of engaging with the world where I and my collaborators can attend to the flux of experience,” said Rodriguez.

The Latin American director, who has had retrospectives of her work in Argentina, Colombia and Spain, explained that she uses tools and methodologies from the documentary and combines them with fiction, working with actors and non-actors. This is her first film shot in Canada.

My Two Voices is “my interpretation of them,” said Rodriguez.

“It’s my attempt to capture elements of their essence by focusing on their gestures and the textures and colours in their spaces, as well as my interest in listening to their stories and experiences.”

The director thanked Ana, Claudia and Marinela for the opening they gave her, and shared that she is still working with her own immigrant identity.

“I am forever grateful for their generosity and trust and for reminding me that we are not one but many,” she says. “That there is a multiplicity of places, times, and identities that are part of our journeys as immigrants, always walking on shaky ground.”

The post ‘My Two Voices’ is a poetic reflection on immigrant identity appeared first on New Canadian Media.

When there are changes in the market, who should you really be listening to?