Toronto Mayor John Tory has often worn his love of the Raptors on his sleeve. He did that again, and this time literally, during Game 1 of the NBA Eastern Conference final between Toronto and Milwaukee Bucks on Wednesday night.
0
May 16, 2019 12:00 PM By: Canadian Press 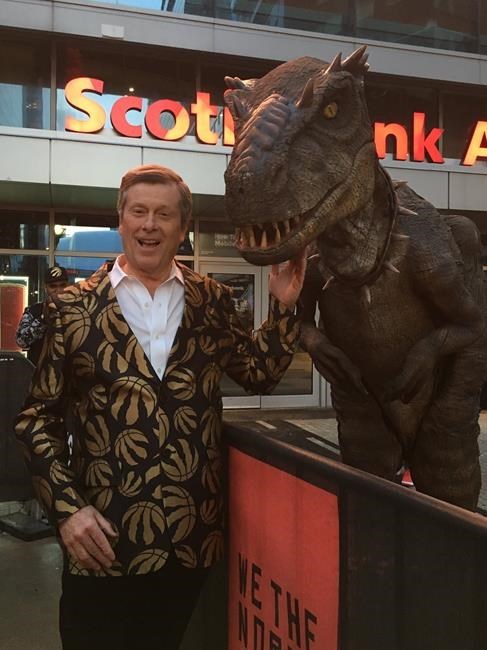 Toronto Mayor John Tory has often worn his love of the Raptors on his sleeve.

He did that again, and this time literally, during Game 1 of the NBA Eastern Conference final between Toronto and Milwaukee Bucks on Wednesday night. Tory channelled his inner Don Cherry and wore a loud black jacket covered with gold Raptors logos — in the style of Drake's OVO brand — while mingling with fans watching the game in Jurassic Park outside Scotiabank Arena.

Tory's fashion statement made some noise, with the Sportsnet broadcast cutting away several times to show the Toronto mayor cheering along with fans as the Raptors took an early lead against the Bucks. A tweet featuring four pictures of Tory hobnobbing in his Raptors-themed sartorial splendour had over 1,000 likes as of Thursday morning.

But perhaps a jacket that mimicked Drake's brand also brought the Toronto rapper's famous sports curse, as the Raptors blew a fourth-quarter lead en route to a 108-100 loss at Milwaukee's Fiserv Forum.

Tory has shown off his Raptors fandom before. He wore a jacket with the Raptors' popular "We The North" slogan to a meeting with Prince Harry and Prime Minister Justin Trudeau to promote the 2016 Invictus Games in Toronto. And he has joked that Raptors superstar Kawhi Leonard deserves to be Toronto's mayor after Leonard's buzzer-beating winning shot in Game 7 of Toronto's Eastern Conference semifinal with Philadelphia.

Game 2 of the East final is Friday night in Milwaukee. There has been no word yet on whether Tory plans another fashion statement.

AP sources: No consensus yet on NBA return-to-play plan
May 29, 2020 6:50 PM
Comments
We welcome your feedback and encourage you to share your thoughts. We ask that you be respectful of others and their points of view, refrain from personal attacks and stay on topic. To learn about our commenting policies and how we moderate, please read our Community Guidelines.