TORONTO — Veteran defender Drew Moor was back in training Tuesday, welcome news for a Toronto FC team that has yet to find its defensive footing this season. Toronto (4-1-1) leads the MLS in offence, averaging 3.0 goals a game.
0
Apr 23, 2019 4:13 PM By: Canadian Press 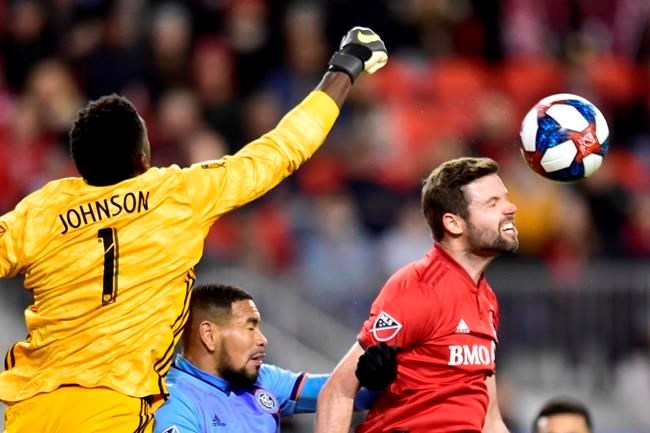 TORONTO — Veteran defender Drew Moor was back in training Tuesday, welcome news for a Toronto FC team that has yet to find its defensive footing this season.

An adductor injury kept Moor out of last Friday's 4-3 win over visiting Minnesota and a 3-2 loss in Seattle the previous week.

"He'll be available for this weekend," coach Greg Vanney said of his 35-year-old defensive quarterback.

Next up for Toronto is Portland (1-5-1) on Saturday with Vanney hoping for more security in front of his goal.

"We can't keep digging ourselves out of these situations. That's not a formula for success longterm either. We've got to be more solid defensively and more reliable defensively and continue to create problems for teams on their defending."

On the plus side, Toronto sports a league-best 2-0-0 record when conceding the first goal.

Ask Vanney what's going wrong on defence and the former U.S. international defenders reels off a list, including losing too many balls in bad positions and the backline making some poor decisions.

"It's about doing the right things at the right moments," he said. "And then I think there's some individual mistakes in there that guys have to clean up and have to be reliable. First and foremost for me about being a pro is you don't have to be spectacular, just be reliable.

"And that's going to be my message to everybody."

The Timbers are coming off a 3-1 win in Columbus, the latest stop on a lengthy road trip while Providence Park is being renovated. Portland will have played 12 straight road games by the time it returns home for a June 1 date with Los Angeles FC.

Portland's defence is even porous than Toronto's, ranking 23rd at 2.57 goals a game. The Timbers stand ninth on offence, averaging 1.29 goals a game.

The Columbus win marked the first time this season that Portland has limited an opponent to under two goals. The Timbers offence, meanwhile, has been held to one goal or less five times.

Toronto will be without star striker Jozy Altidore, who injured his hamstring in the Minnesota game.

"The target is probably three weeks," Vanney said of Altidore's return. "If the gods shine upon us, maybe two weeks, but we're probably looking at three."

Canadian Jordan Hamilton is likely the leading candidate to replace Altidore after scoring twice in two minutes 12 seconds off the bench to secure the win over Minnesota. Ayo Akinola, meanwhile, scored a pair of goals for a TFC under-19 team against an Arsenal youth side at the recent Dallas Cup.

And U.S. international Terrence Boyd is awaiting his first MLS start after seeing 21 minutes of action off the bench.

"We do have options," said Vanney. "We'll play out this week and see who looks sharp and who's ready but obviously Jordan's made a good name for himself and put himself up there with his entrance last week."

Altidore's absence is not expected to change the role of Spanish playmaker Alejandro Pozuelo, who has four goals and is tied for the league lead in assists with five. He will continue to rove the field, find space and torment defenders.

While it may have problems at the back, Vanney's team has proved to be adept at closing out opponents. With seven goals after the 75th minute of play, it leads the league in late goals.

Canadians seem OK with possibly being benched as playoff venue: survey
Jun 2, 2020 4:00 AM

Raptors guard VanVleet says people 'fed up' with racism and discrimination
Jun 1, 2020 7:56 PM
Canadian para-snowboarder banned for four years for doping violation
Jun 1, 2020 6:40 PM
Comments
We welcome your feedback and encourage you to share your thoughts. We ask that you be respectful of others and their points of view, refrain from personal attacks and stay on topic. To learn about our commenting policies and how we moderate, please read our Community Guidelines.