There are no American men in the ATP's Top 30 for the first time in the nearly half-century of computerized tennis rankings. The highest-ranked man from the U.S., Taylor Fritz, slid one place to No.
May 10, 2021 11:15 AM By: Canadian Press 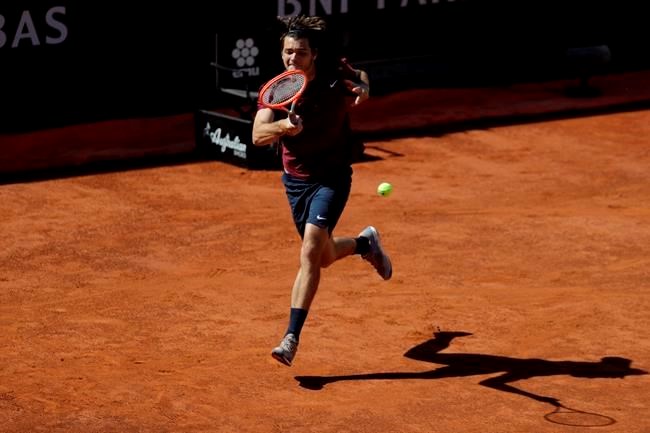 There are no American men in the ATP's Top 30 for the first time in the nearly half-century of computerized tennis rankings.

The highest-ranked man from the U.S., Taylor Fritz, slid one place to No. 31 on Monday after a first-round loss at last week’s Madrid Masters.

Next is John Isner, who made it to the quarterfinals on the red clay in Spain and rose five spots to No. 34.

There always has been at least one man from the United States ranked in the Top 30 each week since the inception of the computer-calculated standings on Aug. 23, 1973. That includes No. 1s such as Jimmy Connors, John McEnroe, Pete Sampras, Andre Agassi, Jim Courier and, most recently, Andy Roddick, who held the top spot for 13 weeks from Nov. 30, 2003, to Feb. 1, 2004.

That was shortly after Roddick won the 2003 U.S. Open, the last time an American man won a Grand Slam singles title.

There are currently 10 players from the country in the Top 100, the same number that Italy has, although there are three Italians in the Top 30: No. 9 Matteo Berrettini, No. 18 Jannik Sinner and No. 28 Fabio Fognini.

Novak Djokovic remained at No. 1 on Monday, extending his record for most weeks leading the ATP to 320, 10 more than the previous mark set by Roger Federer.

There’s a new No. 2, however: Daniil Medvedev overtook that slot from Rafael Nadal, who lost in the quarterfinals in Madrid.

The biggest rise in the Top 50 came from Casper Ruud, a 22-year-old from Norway who moved up six spots to a career-best No. 16 after reaching the Madrid semifinals.

Denis Shapovalov of Richmond Hill, Ont., is the top Canadian at No. 14. Milos Raonic of Thornhill, Ont., is down one spot to No. 20, while Montreal's Felix Auger-Aliassime is down one to No. 21.

The most significant change in the WTA rankings was Aryna Sabalenka’s jump to a career-high No. 4 from No. 7 after winning the title in Madrid.

The 2019 French Open champion is followed by No. 2 Naomi Osaka and No. 3 Simona Halep.

Bianca Andreescu of Mississauga, Ont., is down one spot to No. 7.

Serena Williams, whose first tournament since February is this week’s Italian Open, remained at No. 8.

“Everyone gears up for Top 10 players, and so if I’m in the Top 10, I will be ready. Am I?” 23-time Grand Slam champion and former No. 1 Williams said Monday at her pre-tournament news conference in Rome. “I don’t even know where I am.”

The next Grand Slam tournament is the French Open, which begins main-draw play in Paris on May 30.