Leonard leads Clippers past Doncic, Mavs to reach 2nd round

LAKE BUENA VISTA, Fla. — The Los Angeles Clippers knocked him around and shut his teammates down, and still Luka Doncic kept coming. Kawhi Leonard wasn't worried, because nothing rattles him in the post-season .
Aug 30, 2020 7:27 PM By: Canadian Press 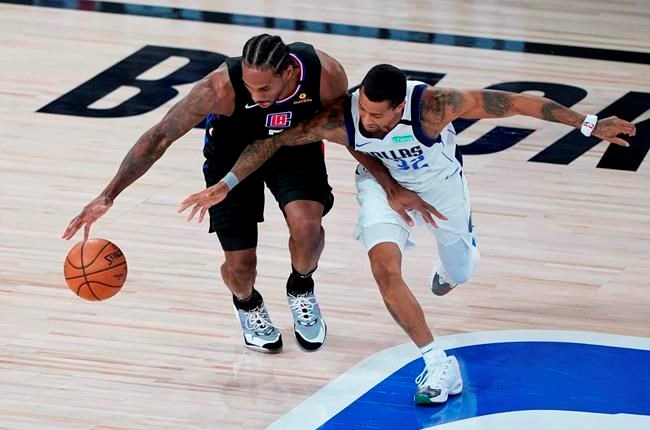 LAKE BUENA VISTA, Fla. — The Los Angeles Clippers knocked him around and shut his teammates down, and still Luka Doncic kept coming.

Kawhi Leonard wasn't worried, because nothing rattles him in the .

“This is playoff basketball and everything is not going to go your way,” Leonard said. “You’re going to have downs and ups. Just got to keep playing.”

Now his team will keep playing into the second round.

Leonard had 33 points and 14 rebounds and the Clippers eliminated Doncic and the Dallas Mavericks with a 111-97 victory Sunday in Game 6 of the first-round series.

Doncic capped a superb first with 38 points, nine rebounds and nine assists, keeping it interesting into the fourth quarter even while playing without injured teammate Kristaps Porzingis.

But with Leonard reaching the 30-point mark for his career-best fifth straight playoff game and a strong defensive effort, the Clippers simply had too many answers.

“I’m proud of our team, how we fight," Doncic said. “I think we fight until the end. The Clippers have an amazing team so it was hard, but I think we gave everything.”

The No. 2 seed in the Western Conference advanced to a second-round meeting with either Denver or Utah. The sixth-seeded Jazz were trying to close that series out in six games later Sunday.

Paul George and Ivica Zubac added 15 points apiece for the Clippers, who turned up their in this one after winning Game 5 with the best offensive performance in their history, when they shot 63% and romped to a 154-111 victory.

Perhaps it was too much to ask to be that sharp again after a four-day layoff, but they didn't need to be even while playing most of the game without starting forward Marcus Morris, who was ejected for a flagrant foul against Doncic in the first quarter.

“You can tell he was the one guy that shoots to close out a series,” Clippers coach Doc Rivers said. “He was calm. He got us in place.”

The Mavericks had only two field goals in the first six minutes of the third quarter, both by Doncic, and by the time he made the second the Clippers had opened the half with a 20-3 run that turned a six-point lead into a 77-54 lead.

He made another 3 that trimmed it to 88-82 with 9:27 to play but Dallas couldn’t get any closer. Los Angeles began putting the ball in Leonard’s hands and he delivered with eight straight Clippers points before consecutive 3-pointers by Reggie Jackson pushed it to 105-89.

Dallas was in its first since 2016 but quickly learned about the physicality, mixing it up with Morris on multiple occasions.

The Clippers led by two when Morris was ejected for swinging his arm down and striking a driving Doncic in the head or neck area. The Clippers picked up their in the second period, limiting the Mavs to 17 points and 33.3% shooting to open a 57-51 advantage at the break.

Clippers: Patrick Beverley had a pregame workout before sitting out for the fifth straight game with a left calf strain. Rivers said the guard had a good practice Saturday and was getting closer to returning but just wasn't ready yet.

Trouble between the Mavs and Morris started in the opener, when Doncic was called for palming the ball and Morris tried to take it out of his hands. He ended up grabbing Doncic, starting a scrum that led to the ejection of Porzingis. Morris later denied trying to hurt Doncic, who battled a sprained left ankle, when he stepped on his foot.

But referee Scott Foster said Morris' reputation didn't factor into the decision to give him a flagrant foul 2 Sunday, an automatic ejection.

“Of course not,” Foster said.

Rivers spent part of the Clippers' day without a game Saturday watching his son Austin help the Houston Rockets beat Oklahoma City in Game 5 of their series. It was the first game Rivers attended in the bubble but hardly his first time watching his son play at Disney. Austin Rivers was a Florida prep star at Winter Park High School.

“It was funny, I usually bring, like, a notepad. I didn’t have anything. I just kind of sat and watched the game,” Rivers said. “You still coach during the game. Not him, but just both teams and you watch what you can do and I got a little mental scouting in. But more importantly it was a great detox for me just to sit there and enjoy basketball in a gym that I’ve been a fan, a spectator, literally hundreds of times.”

Former FIFA official guilty, PSG head cleared at Swiss trial
Oct 30, 2020 9:56 AM
Comments
We welcome your feedback and encourage you to share your thoughts. We ask that you be respectful of others and their points of view, refrain from personal attacks and stay on topic. To learn about our commenting policies and how we moderate, please read our Community Guidelines.