LAKE BUENA VISA, Fla. — On the heels of an historic and emotional week that had the Toronto Raptors "very close" to leaving the NBA bubble, being back on the court offered no refuge for the defending NBA champions on Sunday.
Aug 30, 2020 5:54 PM By: Canadian Press 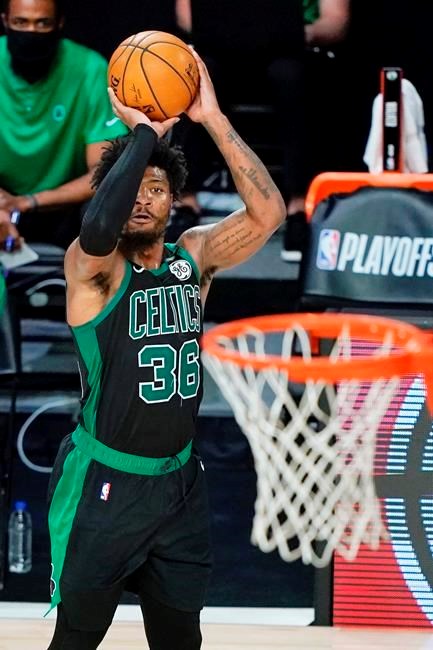 LAKE BUENA VISA, Fla. — On the heels of an historic and emotional week that had the Toronto Raptors "very close" to leaving the NBA bubble, being back on the court offered no refuge for the defending NBA champions on Sunday.

Jayson Tatum and Marcus Smart scored 21 points apiece to lead the Boston Celtics to a lopsided 112-94 win over the Raptors in Game 1 of their best-of-seven Eastern Conference semifinals.

And in the minutes after the demoralizing loss, the Raptors spoke about the emotional toll of recent events, including protests and the subsequent league shutdown after last week's shooting of Jacob Blake, a Black man, in Wisconsin.

"Basketball always matters, but in this situation, at this time, it's taking a backseat," Lowry said. "Yes, it's our job and we're going to go out there and perform at the highest level we can possibly perform at. There's no excuses, but we have an obligation right now to use our platform. That's why we're still here."

Lowry, who'd been a question mark after suffering a sprained left ankle in Game 4 a week ago against Brooklyn, had 17 points, eight assists and six rebounds. Serge Ibaka had 15 points and nine boards off the bench, Pascal Siakam had 13 points, OG Anunoby had 12, Fred VanVleet added 11 points, and Norm Powell finished with 10.

Sport can be solace in turbulent times, but coach Nick Nurse said that wasn't the case for his team Sunday.

A sluggish start was almost expected considering the week. But the Raptors, who've rolled to 32 wins in their past 37 games, were slow and disorganized on the defensive end, and struggled mightily on offence. They were outscored 51-30 from three-point range.

Boston improved to 4-1 against Toronto this season, including two lopsided victories in the restart bubble.

The Raptors didn't put up much of a fight, trailing 19 points in the first half. The gap grew to 22 points in the third quarter, and when Tatum hit a baseline jumper to end the third, Boston headed into the fourth up 88-73.

A three-point play by Lowry to start the fourth sliced the difference to 12, but that was as close as the Raptors would come, and when Smart scored on a three in front of Boston's bench, the long bomb had the Celtics up by 24 points with just under five minutes to play.

"We're not even in the ballpark of doing that yet," Stevens said. "We won one game."

The game marked a second restart of sorts. Racial and social injustice was already a theme for the NBA's restart after several high-profile deaths in the U.S. ignited protests. After Blake's shooting, Powell and VanVleet raise the possibility of a boycott.

On Wednesday, the Milwaukee Bucks did just that, refusing to take the court for their game against Orlando. That led to a shutdown of the league for three days and similar strikes among several pro sports leagues, including the WNBA and NHL.

Asked if the Raptors considered leaving, Ibaka said "We were close, we were very close. We're here . . . we are here for a reason, not only to play basketball but to use our platform to change things out there."

Early in the game, Boston's big man Daniel Theis blew by Marc Gasol like the Spaniard's feet were glued to the floor. The moment exemplified a Raptors defence that was a step behind from the opening whistle. Boston led 39-23 to end the first quarter.

Ibaka's layup capped a 7-0 run to start the second and had the Raptors within nine points. But Toronto's woeful shooting continued — the Raptors were just 1-for-12 from long distance in the second quarter and 5-for-23 from the field. Boston built its lead back up to 17 and took a 56-42 advantage into the halftime break.

Late in the third, a VanVleet turnover led to a windmill dunk by Boston's Robert Williams. The demoralizing play summed up Toronto's afternoon.

Lowry said the roller-coaster week, however, wasn't to blame.

"The Boston Celtics beat us tonight, one game, we have to regroup, readjust, and get ready for the next one."

After dispatching the Brooklyn Nets easily in four games in the opening round, the Raptors indeed face a much stiffer test against Boston, which seems to have found the formula against Toronto. The Raptors beat 10 teams in the NBA's restart including Milwaukee and Los Angeles, but have now lost twice by a combined 40 points to Boston.

The Raptors need Siakam, who picked up three early fouls, to get going offensively.

"(Early foul trouble) kind of makes you think about how you play and stuff and it makes you question a lot of things in how you move, but it happened and I've just got to figure out a way to bounce back once that happens," he said. "I can't let it affect my game."

The afternoon began with a moment of silence for 18-year NBA veteran Cliff Robinson, coach Lute Olson, and actor Chadwick Boseman, who all died this week.

"It was very sad to see him leave us so early," Ibaka said of Boseman.

Both teams knelt with arms linked for the U.S. and Canadian anthems.

This report by The Canadian Press was first published Aug. 30, 2020.

Former FIFA official guilty, PSG head cleared at Swiss trial
Oct 30, 2020 9:56 AM
Lisa MacLeod to make announcement about Ontario's World Cup, Commonwealth Games bids
Oct 30, 2020 4:00 AM
Comments
We welcome your feedback and encourage you to share your thoughts. We ask that you be respectful of others and their points of view, refrain from personal attacks and stay on topic. To learn about our commenting policies and how we moderate, please read our Community Guidelines.