GWANGJU, Korea, Republic Of — Maggie MacNeil exceeded her expectations at the world aquatics championships. And then some. The 19-year-old from London, Ont.
0
Jul 22, 2019 11:43 AM By: Canadian Press 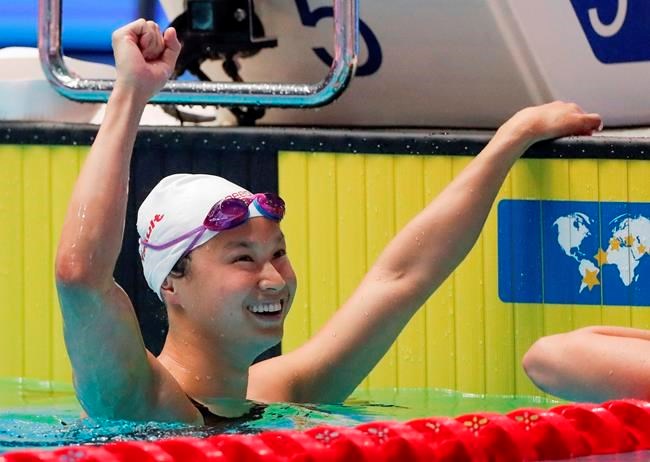 GWANGJU, Korea, Republic Of — Maggie MacNeil exceeded her expectations at the world aquatics championships. And then some.

The 19-year-old from London, Ont., competing on her first senior national team, stunned many observers by winning the women's 100 metre butterfly Monday. MacNeil also earned Canada its first gold medal of the competition and surprised herself along the way.

"Definitely not," MacNeil said when asked if she saw the accomplishment coming. "I was hoping to get to a semifinal and maybe make a final.

"I felt good in warmups but emotionally I've never been so nervous (before final)."

MacNeil set a Canadian record with a time of 55.83 seconds, 0.39 seconds ahead of reigning Olympic champion and world-record holder Sarah Sjostrom of Sweden.

Emma McKeon of Australia was third. Sjostrom had won the title four times.

Sjostrom took it out strong, dipping under her world-record pace on the first lap, while MacNeil was in fifth. But MacNeil roared back with the fastest closing lap — 29.06 — of the eight-woman final and touched first.

Even after touching the wall, MacNeil still wasn't aware she'd won the race.

"I saw Sarah in my periphery," she said. "I didn't have the greatest touch but at that point all I was hoping for was to get a medal for Canada.

"It (winning feeling) is pretty indescribable."

After receiving their medals, the three women gathered on the top podium spot and raised their palms to the crowd, displaying a message to ailing 19-year-old Japanese swimmer Rikako Ikee.

"Rikako never give up" it read, with hearts decorating their palms. Sjostrom came up with the idea.

Ikee announced in February that she has leukemia. She was the world junior champion in the 100 fly and had the fastest time in the world last year. She is aiming to return in time to compete in the Tokyo Olympics.

"We're hoping this will show that we're supporting her and we're here if she needs anything," said MacNeil.

MacNeil has one more individual event to compete in — the women's 50-metre butterfly. But she figures that with Monday's win, she created more work for herself on Canada's relay squads.

"But that's a good thing," she said with a chuckle.

The 100-metre butterfly victory also gives MacNeil the luxury of being able to think about next year's Tokyo Olympics more seriously. While the gold medal hasn't guaranteed MacNeil an Olympic berth, it's generally regarded as the first step towards selection, and her time can stand against those posted at the Olympic trials.

And the same would apply for Pickrem.

"It does boost my confidence going into the Olympics," MacNeil said.

In the meantime, MacNeil's first order of business is coming to grips with her stunning victory.

"I don't imagine getting much sleep," she said. "No, it hasn't sunk in and I'm not sure it will even after the meet."

Meanwhile, Kylie Masse of LaSalle, Ont., and Taylor Ruck of Kelowna, B.C., advanced to the final of the women's 100 metre backstroke. Masse, the reigning world champ, won her semifinal.

It was MacNeil's second medal in as many days. The University of Michigan student teamed with fellow teenagers Ruck, Penny Oleksiak and Kayla Sanchez to win bronze in the 4x100 metre freestyle relay on Sunday.

"It might seem just another gold medal but for me it's really special to be here and be able to win," said Hosszu, who last year filed for divorce from her husband and training partner. "It's been a tough journey."

Peaty claimed the title in 57.14 seconds, a night after he became the first man to break 57 seconds in the semifinals. The British swimmer was under his own world-record pace at the turn before coming home a full body-length in front and 1.32 seconds ahead of teammate James Wilby.

In the semis, Peaty was timed in 56.88. He's also the current Olympic champion.

"That'll fuel me for next year because I know how bad I want to clear 56 even faster now," Peaty said. "I know exactly how to do it but I've obviously run out of opportunities here."

The United States won its first-ever gold in the men's 50 fly, a non-Olympic event. Caeleb Dressel's time of 22.35 set a championship record and earned him a ninth career world title.

China's Sun Yang was back in the pool for the 200 freestyle semifinals a night after winning the 400 free. He qualified second-fastest behind Clyde Lewis of Australia. The final is Tuesday night.

Earlier Monday, FINA's executive board met in Gwangju to discuss Mack Horton's podium protest against Sun and decided to send a warning letter to Swimming Australia and to Horton.

"While FINA respects the principle of freedom of speech, it has to be conducted in the right context," the board said in a statement.

Horton refused to take his spot on the medals stand or shake Sun's hand after finishing second to the Chinese star in the 400 free. The Aussie swimmer is angry that Sun, who served a three-month doping suspension in 2014, is being allowed to compete in Gwangju before he faces a Court of Arbitration for Sport hearing in September that could potentially end his career.

— With files from The Associated Press

Quarterbacks Jennings, Arndt among players released by Ottawa Redblacks
Jan 23, 2020 3:42 PM
Comments
We welcome your feedback and encourage you to share your thoughts on this story. We ask that you be respectful of others and their points of view, refrain from personal attacks and stay on topic. To learn about our commenting policies and how we moderate, please read our Community Guidelines.