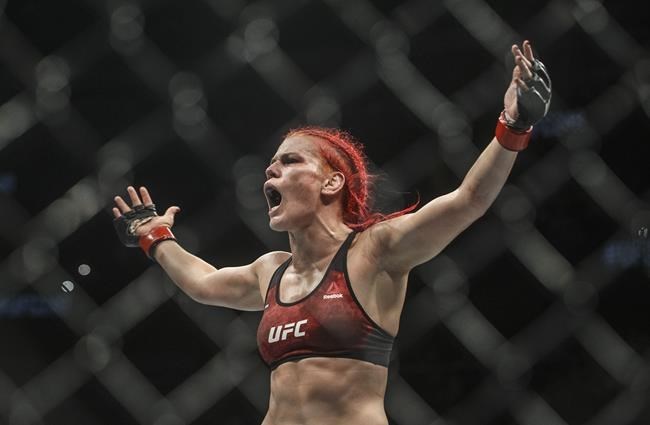 Robertson, a native of Niagara Falls, Ont., who fights out of Coconut Creek, Fla., took Botelho down three times, punishing her with 73 ground strikes while spending nine minutes 34 seconds controlling the fight on the ground.

"The plan was also to finish her, so I'm not happy," said Robertson, who called out No. 13 Antonina (Pantera) Shevchenko after the fight.

"I'm trying to get that 100 per cent finish rate and I ruined it tonight so I'm not happy," she added.

Ranked 15th among the UFC's 125-pound contenders, Robertson had finished her opponent in her previous five UFC victories, tying a promotion record. Her sixth flyweight victory is a UFC record.

She already holds the UFC women's record for most submission wins at four. Robertson also boasted the highest control time percentage in UFC flyweight history (65.2 per cent) and ranked second in takedown accuracy (52.4 per cent).

Robertson, who appeared on Season 26 of "The Ultimate Fighter," improved her record to 6-2-0 in the UFC and has now won four of her last five bouts.

She received her black belt in Brazilian jiu-jitsu from coach Din Thomas in her first day out of quarantine at Abu Dhabi.

Brian (T-City) Ortega, ranked No. 2 among featherweight contenders, faced No. 4 Chan Sung Jung, known as the Korean Zombie, in the main event at the Flash Forum on Yas Island.

It marked Ortega's first fight since a bruising December 2018 loss to then champion Max (Blessed) Holloway at UFC 231 in Toronto. Ortega absorbed 290 significant strikes before the bout was halted by the doctor after four rounds.

Robertson finally forced Botelho down to the ground in the final minute, absorbing a knee in the process. The round ended with the Canadian on top.

Botelho landed another kick early in the second round but was taken down trying another after Robertson lost her mouthguard. Robertson moved in to side control and then mount, firing elbow strikes from above as the round ended.

Botelho came out for the final round with bruising under her right eye. Robertson took her down again less than a minute into the round. Regaining mount position, the Canadian fed Botelho a steady diet of elbows while looking for a submission as the fight wound down.

The 25-year-old Robertson was coming off a June third-round submission win over American Cortney (Cast Iron) Casey in Las Vegas.

Botelho (8-3-0) had won three of her four previous UFC outings. At five foot eight, the 31-year-old Brazilian held a three-inch advantage in height and four inches in reach.

This report by The Canadian Press was first published Oct. 17, 2020

Rather than motivational talks, McBean tells athletes to stay on goal-achieving path
Oct 27, 2020 5:59 PM
Kansas City mayor, star quarterback want Raptors to make Missouri temporary home
Oct 27, 2020 5:56 PM
Comments
We welcome your feedback and encourage you to share your thoughts. We ask that you be respectful of others and their points of view, refrain from personal attacks and stay on topic. To learn about our commenting policies and how we moderate, please read our Community Guidelines.