SURREY, B.C. — Coach DeVone Claybrooks says his B.C. Lions are ready to handle a familiar face when the Ottawa Redblacks visit on Friday. Lining up on the other side of the field will be quarterback Jonathon Jennings, who spent four years in B.C.
0
Sep 12, 2019 5:14 PM By: Canadian Press 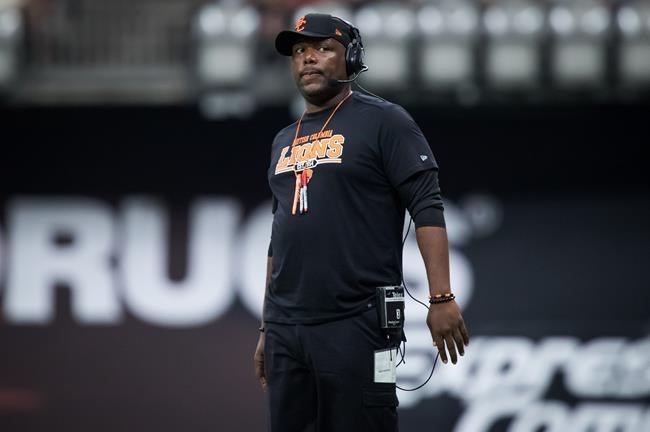 SURREY, B.C. — Coach DeVone Claybrooks says his B.C. Lions are ready to handle a familiar face when the Ottawa Redblacks visit on Friday.

Lining up on the other side of the field will be quarterback Jonathon Jennings, who spent four years in B.C. before signing with Ottawa as a free-agent in February.

The 27-year-old Columbus, Ohio, native split starting duties with veteran Lions pivot Travis Lulay last season. In Ottawa, Jennings began the year behind veteran Dominique Davis. But Davis struggled and lost the No. 1 spot leaving the starting role to Jennings, who has tallied 736 passing yards and three touchdowns in five games for the Redblacks.

"He's a mobile quarterback that has a pretty ball. I mean, it's a deep ball. He can find the receivers, they're working fairly well together," Claybrooks said after the Lions practised on Wednesday.

"We know what he does and what he likes to do and we're just going to try to make sure we put some pressure on him to get him off the spot. But we've also got to be mindful that he can still run the ball as well."

Defensive back T.J. Lee often lined up against Jennings in practices when the pair were both playing for the black and orange.

"We know who Jennings is. We know what he doesn't like to see, the looks he don't like in the back end, coverage wise," he said.

Still, the Lions know they have to be solid on both ends of the field if they want to capture their first home victory of the season this week, Lee added.

"Ultimately, if we don't get enough push up front and we don't make plays down the stretch when it really matters … then it doesn't matter," he said. "We'll be back in the same boat."

Jennings told reporters this week that he's looking forward to being back in Vancouver, but he knows the squad has undergone a dramatic overhaul since he left last winter.

"I look at the roster and there are a lot of guys I don't know, a lot of coaches that are new to that system as well," he said. "But there's a lot of familiar faces as well, a lot of guys that I know and played with for a long time. It'll be exciting. I went against those guys in practice a lot and it'll be exciting to strap it up on the field with them."

Both the Lions and Redblacks are struggling through difficult seasons.

B.C. is nursing a seven-game losing skid and hasn't won since July 6. Ottawa, meanwhile, has dropped four games in a row, including a 46-17 blow out to the Toronto Argonauts last weekend.

Neither team is going into Friday's match up feeling as if they have the advantage.

"We can't take anybody lightly," Jennings said. "We're at the bottom of the barrel ourselves and we need to win. So we just need to focus on our task at hand. We've got to make those plays when we have the opportunities and make sure that we don't beat ourselves, first and foremost."

An opponent's record shouldn't have any impact on how the Lions prepare, said quarterback Mike Reilly, who signed a $2.9-million, four-year deal with B.C. in February.

"(Ottawa) has three times as many wins as we do so that has nothing to do with our issues," he said. "We're in no position to feel comfortable about any opponent that we face."

Reilly — who has 2,667 passing yards, 10 touchdowns and 11 interceptions so far this season — wants to see his squad focus on its own play and fix the mistakes they've made in recent games.

"You can't control what the other teams do," he said. "You've got to be able to react to it and play against it, but ultimately it's about controlling what your own team does and that's certainly where we are."

INJURY WOES: The Redblacks lost another starter last week when safety Antoine Pruneau went down in the first quarter. He was later spotted wearing a walking boot on the sidelines and will reportedly be out for several weeks. Ottawa also will be without top Canadian receiver Brad Sinopoli and linebacker Avery Williams.

QB PROTECTION: B.C. continues to lead the league in sacks allowed with Reilly having been taken down a staggering 45 times in 11 games. Ottawa has given up 22 sacks so far this year.

SEEKING OFFENCE: The Lions and Redblacks linger at the bottom of the league when it comes to points for this season. B.C. has tallied just 221, the fewest in the West, while Ottawa has a CFL-low 210.

Oilers' Zack Kassian says a win is best revenge against Flames' Matthew Tkachuk
Jan 28, 2020 5:08 PM
Comments
We welcome your feedback and encourage you to share your thoughts on this story. We ask that you be respectful of others and their points of view, refrain from personal attacks and stay on topic. To learn about our commenting policies and how we moderate, please read our Community Guidelines.