It's always good to have options, and Mark Korte has plenty regarding his football career.
0
Apr 6, 2018 9:00 AM By: Canadian Press 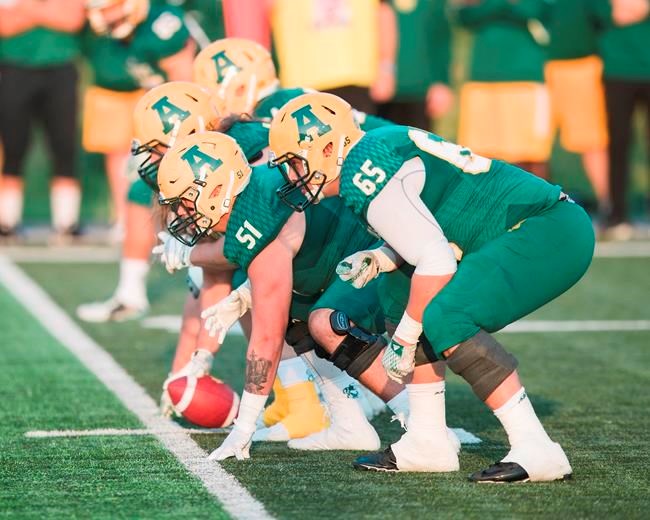 It's always good to have options, and Mark Korte has plenty regarding his football career.

The University of Alberta offensive lineman is a highly touted prospect for next month's CFL draft, but is also a potential priority free-agent signing following the April 26-28 NFL draft. The six-foot-three, 295-pound native of Spruce Grove, Alta., could also return to the Golden Bears for a fifth season.

"There's a lot of choices for me right now," Korte said. "Honestly, I'm going to be ecstatic and really happy and excited about wherever I end up playing football next year."

However, Korte said the prospect of becoming a full-time football player and no longer having to juggle academics and athletics is enticing.

"I'll still finish my (commerce) degree but it would be exciting to move on and be able to spend every day on football as opposed to having to balance so much of my time," Korte said. "It's such a demanding thing to balance football and school so being able to concentrate my time on one would be fun."

Korte was Canada West's top lineman last year and a division all-star after anchoring an offensive line that paved the way for Hec Crighton Trophy winner Ed Ilnicki to rush for a conference-record 1,468 yards. More importantly, Alberta (3-5) made the playoffs for the first time in seven years before dropping an opening-round 39-22 decision to eventual division champion Calgary (7-1).

After finishing No. 12 on the CFL scouting bureau's top-20 prospects list for the '18 draft in December, Korte was invited to the East-West Shrine Game in January, where he practised before CFL and NFL officials.

Korte performed well at last month's CFL combine in Winnipeg. Two days later with officials from the Washington Redskins and Edmonton Eskimos looking on, Korte excelled at his pro day. He posted times of 5.20 seconds (40-yard dash), 4.62 (shuttle run) and 7.47 (three-cone) while registering 19 reps in the bench press and a 30-inch vertical jump.

Korte's three-cone time would've landed him sixth among offensive lineman at the NFL combine. He also would've finished tied for eighth in both the short shuttle and vertical.

The scouting report on Korte says he's a "tenacious run blocker who plays with good physicality." It adds he's a good athlete with "the ability to operate in space," and dominated his level of competition.

But it also listed his competition level as a weakness and said Korte must still "fill out and add much-needed mass and overall muscle on his frame."

Korte takes it all in stride.

"There's always areas to develop in a sport like football," he said. "That's what makes it so fun. you're never really finished growing as a player.

"Growing up that's every kid's goal, to play pro sports. It's always been on my mind but recently it's started to set in that it might be a reality."

The off-season for a draft-eligible player can be nerve-wracking, given the importance teams place on workout results and individual interviews. And then there's the matter of not knowing what lies ahead and where one will embark on a pro career.

"There's a lot of training that goes into it and it's definitely a challenge at times but it's also a lot of fun," Korte said. "This is a once-in-a-lifetime thing to go through and it's been an exciting two months and the next month will be exciting as well.

"Either the NFL or CFL would work. There's high competition in both leagues so I'm excited to get a crack at playing pro football and seeing where things go in the next month and move forward."

Korte grew up watching the Eskimos and would welcome an opportunity to play at Commonwealth Stadium. But on draft day if the rival Calgary Stampeders came calling, Korte would have no issues donning red and white either.

"The games against Calgary are always extra special," Korte said. "But as much as I did grow up in Edmonton, I think it would be a blast to play in Calgary.

"People like (president/GM) John Hufnagel and (head coach) Dave Dickenson have really done a special thing with that team. Playing for Calgary or any other organization in the CFL would be incredible."

As for the NFL, Korte has no allegiances to specific teams.

"It's the NFL so any team would be a special experience for me," he said. "Wherever I might land, I think it's going to be an exciting time to grow as a player and person."

Riders linebacker Elimimian elected new president of CFL Players' Association
Feb 27, 2020 4:36 PM
Comments
We welcome your feedback and encourage you to share your thoughts on this story. We ask that you be respectful of others and their points of view, refrain from personal attacks and stay on topic. To learn about our commenting policies and how we moderate, please read our Community Guidelines.