In The News is a roundup of stories from The Canadian Press designed to kickstart your day. Here is what's on the radar of our editors for the morning of July 22 ... What we are watching in Canada ...
Jul 22, 2020 8:34 AM By: Canadian Press 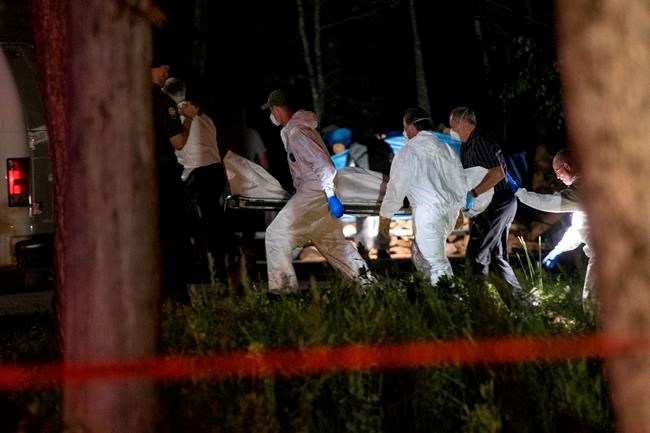 In The News is a roundup of stories from The Canadian Press designed to kickstart your day. Here is what's on the radar of our editors for the morning of July 22 ...

What we are watching in Canada ...

MONTREAL — Quebec provincial police will hold a news conference later today to shed light on the circumstances surrounding the deaths of two young sisters and their father in St-Apollinaire, southwest of Quebec City.

Provincial police announced on Twitter on Monday night they found what they believed is the body of fugitive Martin Carpentier in the same search area they'd looked during an intense 10-day manhunt.

Police said it appeared Carpentier took his own life, but did not provide further details or say how he'd gone undetected for 12 days.

The discovery came nearly two weeks after Carpentier's car was involved in a crash on the evening of July 8 in the small town, but neither he nor daughters Norah and Romy Carpentier were inside the vehicle when responders reached the scene.

An Amber Alert was triggered the next day, but lifted on July 11 when the bodies of Norah, 11, and Romy, 6, were found in the woods nearby. Police have not yet released their cause of death.

On Monday afternoon, hundreds gathered outside the funeral of the two girls, which took place in their hometown of Levis, Que.

OTTAWA — Finance Minister Bill Morneau will appear today before a House of Commons committee that is probing a cancelled agreement for WE Charity to run a student-volunteer program.

Morneau has apologized for not recusing himself from the cabinet discussions and vote on the agreement, given his daughters have ties to WE — including one who works in an administrative arm of the organization.

He will be the latest cabinet minister to be grilled over the aborted deal that would have seen WE receive more than $43.5 million to oversee a program with a budget of up to $912 million.

Morneau, like Prime Minister Justin Trudeau, is being investigated by the federal ethics watchdog for possible violations of conflict of interest rules.

On Tuesday, Canada's top bureaucrat said he couldn't see not having the finance minister and prime minister involved in discussions about a program as big in scope and price as the Canada Student Service Grant program.

WASHINGTON — U.S. President Donald Trump is using the Department of Homeland Security in unprecedented ways as he tries to bolster his law-and-order credentials by making a heavy-handed show of force in cities around the nation ahead of November elections.

His plan to deploy federal agents to Chicago and perhaps other Democratic-run cities where violence is spiking represents Trump's latest effort to use the agency to supplement local law enforcement in ways that bolster his reelection chances.

Trump has already deployed Homeland Security agents to Portland, Ore., on the grounds of protecting federal buildings from protesters.

What we are watching elsewhere in the world ...

The U.S. Justice Department says hackers working with the Chinese government targeted firms developing coronavirus vaccines and stole hundreds of millions of dollars worth of intellectual property and trade secrets from companies worldwide.

The indictment says the hackers in recent months researched vulnerabilities in the computer networks of Massachusetts and Maryland companies known for their work in developing vaccines and treatments.

The case was filed this month in federal court in Washington state and was unsealed Tuesday.

The indictment includes charges of trade secret theft and wire fraud conspiracy against the hackers, who prosecutors say stole information of interest to the Chinese government.

Newfoundlanders voted narrowly in a referendum to join Confederation. Newfoundland had been a British Dominion until 1934 and the onset of the Great Depression when, saddled with crushing debts, it reverted to Crown colony status. The campaign for confederation with Canada was led by journalist Joey Smallwood, who was asked to form an interim government after Newfoundland officially became a province on March 31, 1949, and whose Liberals went on to win the first general election.

EDMONTON — The Edmonton Eskimos are no longer in the CFL.

The franchise announced Tuesday it's discontinuing the Eskimos name. It follows a similar decision by the NFL's Washington team as pressure mounts on teams to eliminate racist or stereotypical names.

The Edmonton club will begin "a comprehensive engagement process" on a new name. Until then, the franchise will be called EE Football Team and Edmonton Football Team.

Edmonton president Chris Presson says the club hopes it can keep its double-E logo and green and gold colours.

The decision comes following a review by the franchise after it twice opted to maintain its team name. The Eskimos moniker has been tied to sports teams in Edmonton since the 19th century but critics say the name is derogatory and a colonial-era term for Inuit.

In February, the franchise announced it was keeping the name after a year-long research that involved Inuit leaders and community members across Canada. The club said it received "no consensus" during that review.

This report by The Canadian Press was first published July 21, 2020.