COLUMN: The fine art of finding something to do during pandemic

We find ourselves doing things we wouldn’t have considered before the COVID-19 plague
Mar 1, 2021 7:00 AM By: Bob Bruton 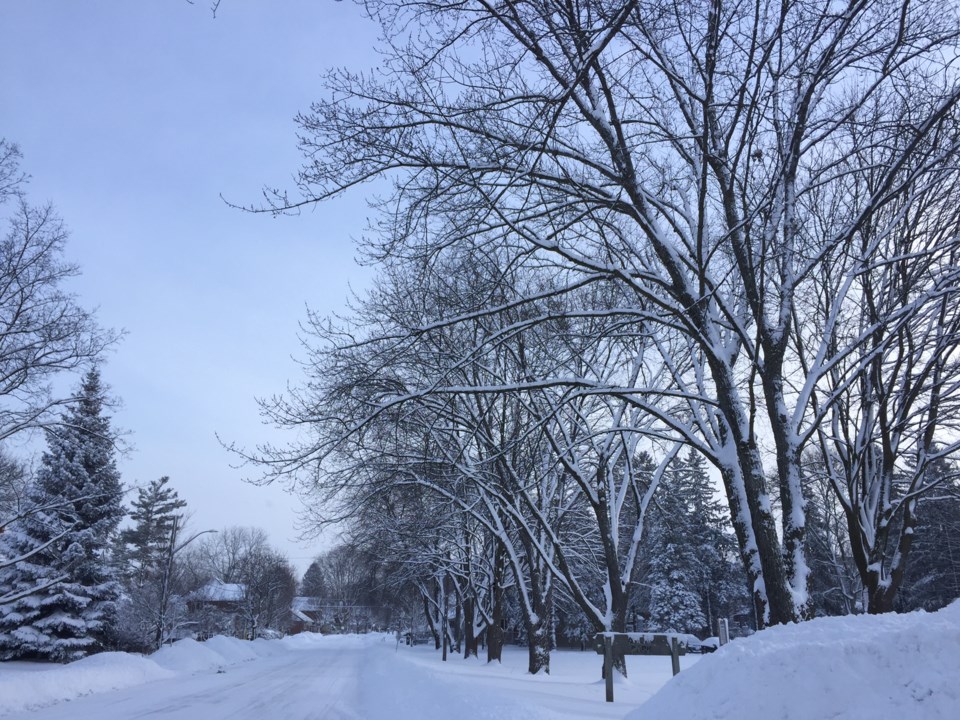 Barrie's Shear Park in winter, where the Frisbees fly

So I was walking my dog in Shear Park the other day, trying to clear my head, when I saw a guy with a yellow Frisbee in the ball field.

I figured he was going to fire the disc for his dog to chase, as people seem to think it’s an unmarked mutt-off-leash park, even though it isn’t. (I checked, no signs, or 'signage', as the city would call it.)

And he did just what I expected, firing that Frisbee with a perfect, tight spin. It gradually rose, drifted over second base, descended and landed somewhere in what would be right field if it wasn’t covered with a foot of snow.

Then I waited and watched, fully expecting to see a dog flying across the field like a proverbial bat out of hell, which is how fast dogs can move when they’re chasing balls or sticks or Frisbees, or just about anything you can hurl away from them. Or when it’s their dinner time.

But no dog was seen.

I stopped walking, which annoyed my dog, as she was intent on going wherever dogs go when walked on a winter afternoon.

Still no dog flying across the field.

Then I saw the guy who threw the Frisbee lope after his disc, pick it up and head out of the ball field’s side gate.

And I thought, probably unfairly, “man, that guy must really be bored.”

That’s one of the big battles of this pandemic for almost a year now — finding ways to fight off boredom.

(You might be thinking this column isn’t helping, but give it a chance).

So we find ourselves doing things we wouldn’t have considered before the COVID-19 plague.

Since I can’t play hockey, because all the rinks are closed, I’ve been snowshoeing in Sunnidale Park and north of the city. I’d never snowshoed before, but since I got the contraptions for Christmas, I figured what the heck. Sometimes I go alone, sometimes I go with friends who are also looking for ways to get out of the house, get some exercise and be a little social without getting too close to others.

Snowshoeing isn’t real exciting, and can be hard work when the white stuff is deep. But there’s little chance of you taxing your adrenal glands tromping through the bush.

But it is relatively safe, which is the first consideration when we venture out these days (although getting up after falling down in snowshoes isn’t easy, especially in deep snow).

Since we’re all human and trying to figure our way through the pandemic, we can’t help but look at what others are doing to stem the boredom. What are the rich and famous up to?

I’m not a real celebrity watcher — mostly because I don’t find them all that interesting — so I look to those on the fringes of celebrity. What are they doing to stay sane, keep busy and be productive?

Musicians are probably the most interesting of the nearly famous I follow, and some have found ways to produce many good tunes during the pandemic.

Remember the Pretenders? Chrissie Hynde and James Walbourne produced nine songs for their (Bob) Dylan Lockdown Series. They reportedly recorded vocals, guitars, keyboards, etc., separately, on their cellphones, shipped them to their engineer/producer and, viola, covers of under-appreciated Dylan songs. They can all be found on YouTube.

Lucinda Williams — who can best be described as an alternative, country, rock, folk, traditional musician — took this idea a few steps further. She made entire albums of Dylan, Tom Petty and Rolling Stones songs with her crack band. Some are also on YouTube, all are for sale on her website.

Musicians have probably been among the hardest-hit entertainers during the pandemic, because there are no live shows except online. And since most, if not all of their music can be had for free on the internet, they have to find other ways of getting noticed, and have something else to sell.

The Pretenders and Williams have both produced other, new albums in the last year as well.

But most of us aren’t musicians or entertainers. We don’t have that one unique talent to fall back on, one that people will pay for, in one shape or form.

So to fight off pandemic boredom we walk our dogs more, watch more TV, read more books, grumble about the Leafs more and even work more, since there’s not a heck of a lot else to do when you’re being told to stay home and stay away from people as much as you can, until this subsides.

Which is good advice, of course, since we all have to do our part to get through this.

It will help when spring comes in a month or so and we can go for a run or long walk without having to worry about getting lost in a snow squall and howling wind. It’s been one of those winters.

And at the very least I just whiled a little more of it away writing this column, as you did by reading it — if you hung in to the end.

Bob Bruton covers city hall for BarrieToday and writes columns when the right topic practically falls in his lap.

COLUMN: It's WrestleMania week, so embrace the corniness and enjoy the spectacle
Apr 8, 2021 7:00 AM
Comments