No doubt I have left out some literary giants and many books readers could not put down, and for very good reasons
Apr 21, 2021 7:00 AM By: Bob Bruton 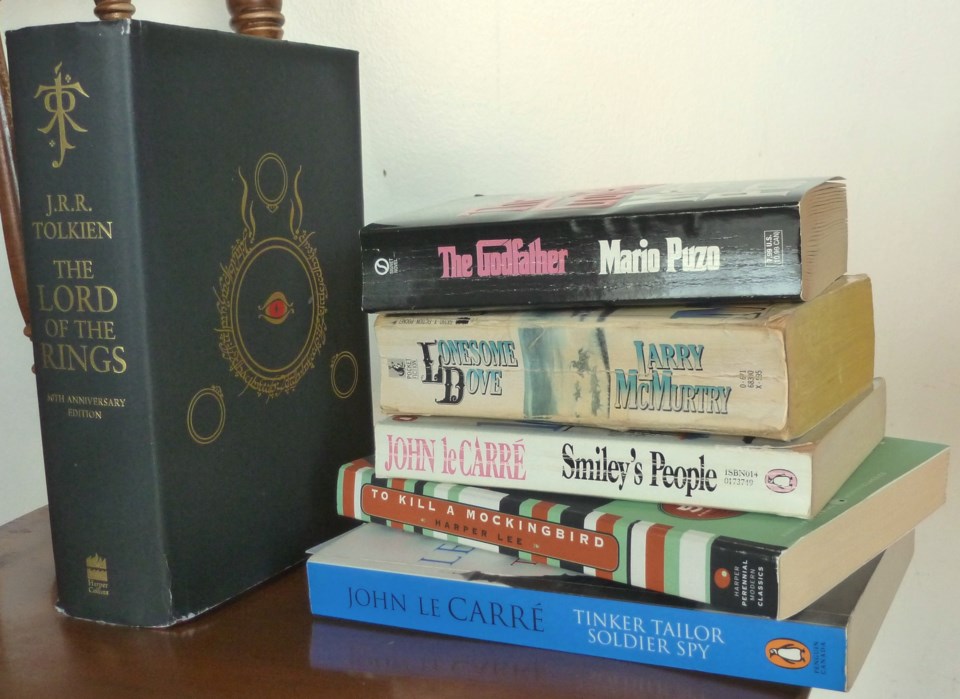 In no particular order, here are some of Bob Bruton's favourite books

Larry McMurtry’s recent death got me thinking about the greatest books I’ve read.

McMurtry, an American who died at 84, wrote Lonesome Dove, a sprawling story of two retired Texas Rangers who drive a herd of cattle from the Rio Grande to Montana during the late 1800s.

Captain Augustus McCrae and Captain Woodrow F. Call are two of the greatest cowboy characters ever imagined, and McMurtry brought them to life as they struggled for a decade to make a living in the little town of Lonesome Dove, then headed north with thousands of cattle through deserts, rivers, winter and grasslands.

McCrae and Call are what’s called highly capable men; they’re stubborn, a little grumpy and certainly set in their ways, but even before push comes to shove on the plains, they not only know what to do, they do it and efficiently

McMurtry wrote more than 30 novels and 30 screenplays, and he obviously knew a good story when he wrote one. Dead Man’s Walk, Comanche Moon and Streets of Laredo explore more of the exploits of Call and McCrae, before and after Lonesome Dove.

Lonesome Dove is as great a book as I’ve read, but I’m not going to rank my favourites from one to 10.

These books are all equally great, in my opinion.

Right there is Harper Lee’s To Kill A Mockingbird, published in 1960, the story of Atticus Finch’s family in the fictional town of Maycomb, Alabama, told through the eyes of his eight-year-old daughter Jean Louise, called Scout.

A small-town southern lawyer, Atticus (as Scout and her brother Jeremy, or Jem, always call their father) defends Tom Robinson, a Black man falsely accused of raping a white woman in the mid-1930s.

To Kill A Mockingbird’s jacket rightly calls it a "masterwork of honour and justice in the deep south, and the heroism of one man in the face of blind and violent hatred."

Lee, who was born in Monroeville, Ala., and died there at 89, was greatly surprised by the critical and commercial success of To Kill A Mockingbird. It won the 1961 Pulitzer Prize in fiction, and the next year became an excellent movie starring Gregory Peck as Atticus Finch, a role for which he won an Oscar.

For decades it was Lee’s only book until, shortly before her death in 2016, Go Set A Watchman emerged. First submitted to her editors in 1957, it’s really a first draft of Mockingbird; Watchman had been rejected and Lee had been advised to write a new novel from Scout’s perspective.

To Kill A Mockingbird has been called an American classic, although it has also been criticized for its depiction of Depression-area southern America. Few have ever called it inaccurate, however.

Anyone insulted my first two books were written by Americans? If so, that’s hard cheese and remember, I’m including them based on merit. My merit, of course. You’re still free to have your own, last time I checked anyway.

By contrast, le Carre’s spies were decidedly unglamorous, failed as much as they succeeded, maybe more, couldn’t keep their private lives together and succumbed to basic human fallacies.

Two of his books — Tinker Tailor Soldier Spy and Smiley’s People, published in 1974 and 1979 respectively — are really the same story, so I’m treating them as one.

Frumpy retired agent George Smiley is lured from his repose, first to hunt and unmask Russian mole Gerald, a spy who’s burrowed his way near the top of British intelligence, called the Circus, and turned it inside out, and then later to ensnare his Soviet boss, codename Karla, who has but one weakness that Smiley finds and ruthlessly exploits.

Smiley’s greatest asset might be that he’s a very good listener, hardly a glamorous trait for a spy, and he understands the importance of what he hears. But George Smiley is a very, very fine spy. And he succeeds despite barely competent bosses and a ruined private life that’s intertwined with his career.

What also makes le Carre’s novels interesting is that he served in British intelligence during the 1950s and early 1960s; it wasn’t long after that M15 and M16 had their own problems with enemies inside their organizations, and the reader understands le Carre’s stories are not completely based upon fiction.

Le Carrie has since left us, too, at age 89 this past December, but his portrayal of espionage and spies will endure.

So will the books of Mario Puzo, and his classic novel The Godfather.

Published in 1969, it is the definitive story of the Mafia underworld — one that inspired innumerable books, movies and TV series. Puzo is a great story teller and his depiction of the brutal world of Don Vito Corleone is so original that the reader almost assumes its author has inside information on Mafia families.

Puzo’s writing is both highly descriptive and succinct, a rare combination, as he shows readers the inner workings of the Corleone family as it struggles to survive with, and ultimately triumph against, other crime organizations.

It’s impossible to think of The Godfather only as a novel, however. The first movie, starring Marlon Brando and Al Pacino, is as vivid as the book itself and was director Francis Ford Coppola’s cinematic masterwork. It won the Oscar for best picture and for best screenplay, which featured a collaboration between Puzo and Coppola.

Brando won the Oscar for best actor, but declined it for the way Native Americans were portrayed by Hollywood.

Puzo just kept on writing Mafia novels until his death in 1999, but none of them were The Godfather. Then again, no one else has written a novel about organized crime that good either.

The final book on my short best-books list is vastly different than those already mentioned, a story of great originality that nonetheless includes elements of fables, folklore and history familiar to most of us.

J. R. R. Tolkien’s The Lord of the Rings features elves, dwarves, wraiths, wizards, trolls, eagles and unspeakable evil, along with men and women, including a dragon in its back story (The Hobbit), along with the author’s own inventions — orcs, wargs, black riders (or Ringwraiths) and, of course, hobbits.

The Lord of the Rings is a fantasy, written by Tolkien to give his United Kingdom homeland its own mythology and backstory about how men and women came to be the dominant species on Earth.

This book in three parts — The Fellowship of the Ring, The Two Towers and The Return of the King — was basically written by its author in his spare time between the late 1930s and early 1950s, often in the evenings, when he wasn’t being an historical linguistics professor at Oxford University.

My hardcover version is just more than 1,000 pages, a fantastic tale of great imagination featuring not only bravery and heroism, but friendship, loyalty and trust among hobbits, elves, dwarves, men, women and a wizard.

The Lord of the Rings also has great evil in Sauron, the Dark Lord who seeks what he must not ever have: the One Ring.

That Tolkien would name his book after its chief Enemy illustrates the scope of danger encountered by Frodo Baggins, Samwise Gamgee, Aragorn, Gimli, Legolas and Gandalf in this perilous adventure.

And, of course, it was a hit movie, in three parts, by Peter Jackson. The extended versions of the movies approaches 11 hours and leaves out large swaths of the book, while probably having too many battle scenes.

War is a significant part of The Lord of the Rings, but Tolkien doesn’t dwell on it in his book. Perhaps losing so many of his friends during the First World War, in which he also served, was the reason.

The Lord of the Rings is without question a magnificent book, surely one of the greatest even written.

So there you have it, five (actually six) of the finest books I have ever read.

No doubt I have left out some literary giants and many books readers could not put down, and for very good reasons.

So view my favourites as a starting point as opposed to the last word on best books ever.

Bob Bruton covers city council for BarrieToday. He needs a little fiction to balance off the stark reality of local politics, and has read all of his favourite books at least twice.