Former Alliston Hornet Nicholas Arcan became a linesman after his competitive hockey days were over
Jun 6, 2020 4:45 PM By: BarrieToday Staff 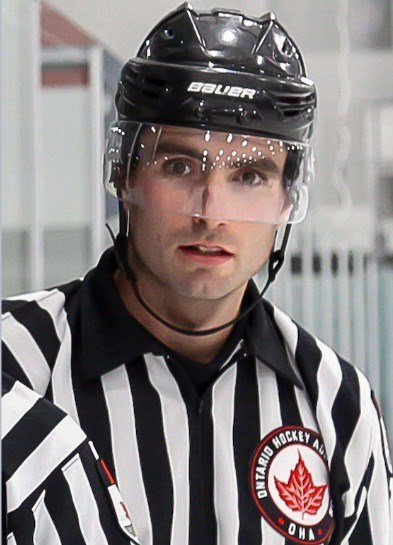 The Ontario Hockey Association (OHA) recognized three officials this week and one of the award winners is Nicholas Arcan, who was named the Top Prospect Linesman.

After playing AAA hockey in the Barrie Area, Arcan of Thornton went on to the OHA where he played 162 games at the Junior A, B and C levels.

After his playing days were over, 2017 saw Arcan began officiating minor hockey.

In 2018 he was selected as a Linesmen to participate in the Minor Midget Showcase Tournament and then Ontario Minor Hockey Association Midget AAA Championships, being assigned to the gold medal game.

In June 2019, he attended the Don Koharski Referee Camp, where he caught the eye of the OHA Director of Officiating Bob Morley. After the camp, he was one of 24 officials that were offered a membership opportunity with the OHA for the 2019-20 season.

Arcan had a very strong start to the season being assigned his first OJHL regular season game Sept. 12, 2019. As he progressed throughout the 2019-20 he was assigned to the OHL Cup, the OMHA Midget Championships, and various OJHL and Provincial Junior Hockey League (PJHL) regular season and playoff games, which included a PJHL Game 7 between the Orillia Terriers and Schomberg Cougars and the Allan Cup Hockey semifinal series.

During his playing days and into his involvement in officiating, Arcan has been a power skating instructor since 2012, an activity that certainly shows in the linesman’s skating abilities.

Away from the ice, Arcan is employed as a field engineer with Ellis-Don Corporation.

Darryl Wolfe of Grimsby, who began officiating minor hockey in his hometown of Grimsby in 1996 won the Officiating Award of Excellence and Mississauga's Kyle Pessoa won the Top Prospect Referee Award.