Innisfil Recreational Complex could be open by mid-September, with other rinks in the municipality opening in October
Aug 4, 2020 5:30 PM By: Shane MacDonald 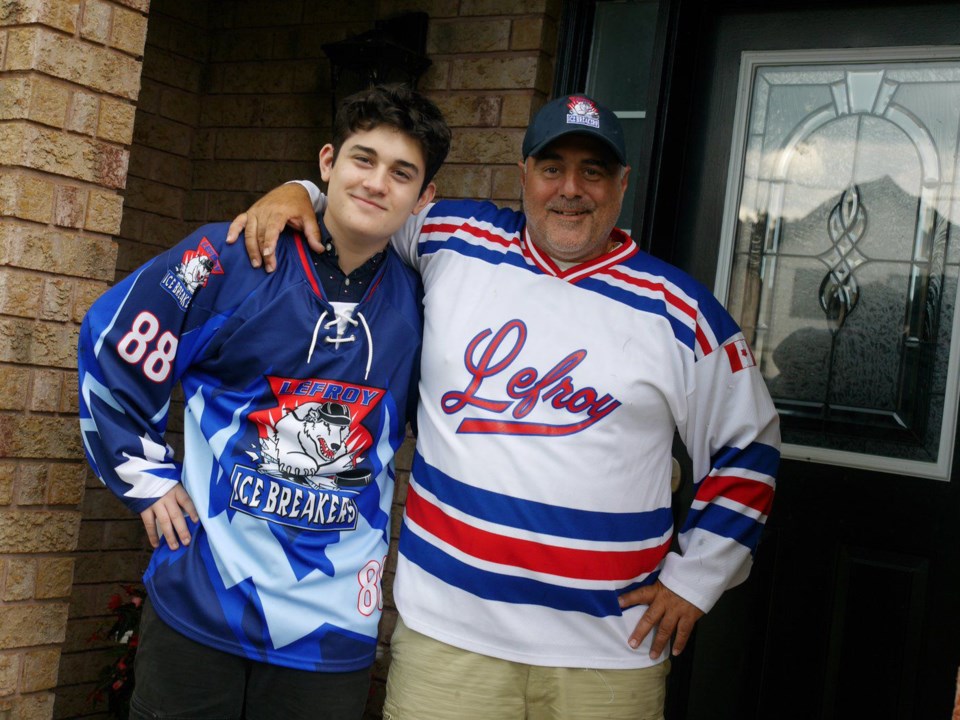 Lefroy Minor Hockey vice-president Rob Figliano and his son, Robbie, are eager to get back to playing hockey. The town of Innisfil says it aims to open one rink in September with others following in October. Shane MacDonald, Local Journalism Initiative Reporter

As more and more of the province reopens, minor hockey players are wondering when they’ll get back on the ice after having their season cut short by the pandemic.

“As of now, we don’t know how it really looks,” Rob Figliano, vice-president of the Lefroy Minor Hockey association, said of the  upcoming season.

While Hockey Canada and the Ontario Hockey Federation have released return-to-play frameworks, Figliano said a lot of details still need to be worked out.

“We’ve just opened up our registrations, but no one is allowed to accept any money yet,” he said.

The Lefroy season ended abruptly when the province went into lockdown in March. No winners and no season-ending sendoffs.

Robbie Figliano, 15, was set to go play in a tournament in Buffalo. The hotel and bus were booked, but they couldn’t go.

“I was disappointed,” said Robbie. “It’s the hotel tournament. That’s the big one.”

As a sort of consolation, the league made up COVID-19 champion medals for players.

“They’re going to get a medal showing they didn’t get to finish their  year,” said Figliano. “But it was a crazy year, and they’ve got something to look forward to.”

According to the Town of Innisfil, they can start looking forward to mid-September and October. That’s when the town is aiming to open its rinks, said Tammy Botham, supervisor of leisure services.

“That is our goal right now, to get the kids back on the ice and get  them some form of norm back,” Botham said. “Keep in mind we are still working with Simcoe-Muskoka health and the province on the guidelines.”

Botham said a rink in the Innisfil Recreational Complex could be open by mid-September, with other rinks in the municipality opening in October.

She said the town and the leagues will work closely to get kids back on the ice.

“Our priority is safety and getting those children back active,” she said.

De Guzman ready to take command of 1812 Barrie soccer club
Sep 23, 2020 7:00 PM
Comments
We welcome your feedback and encourage you to share your thoughts. We ask that you be respectful of others and their points of view, refrain from personal attacks and stay on topic. To learn about our commenting policies and how we moderate, please read our Community Guidelines.