From Collingwood to Calgary, ice-maker takes his talents to the world stage

Eldie Benson went from working in the Toronto film industry to becoming one of the top ice-makers in the country
May 9, 2021 4:00 PM By: Jessica Owen 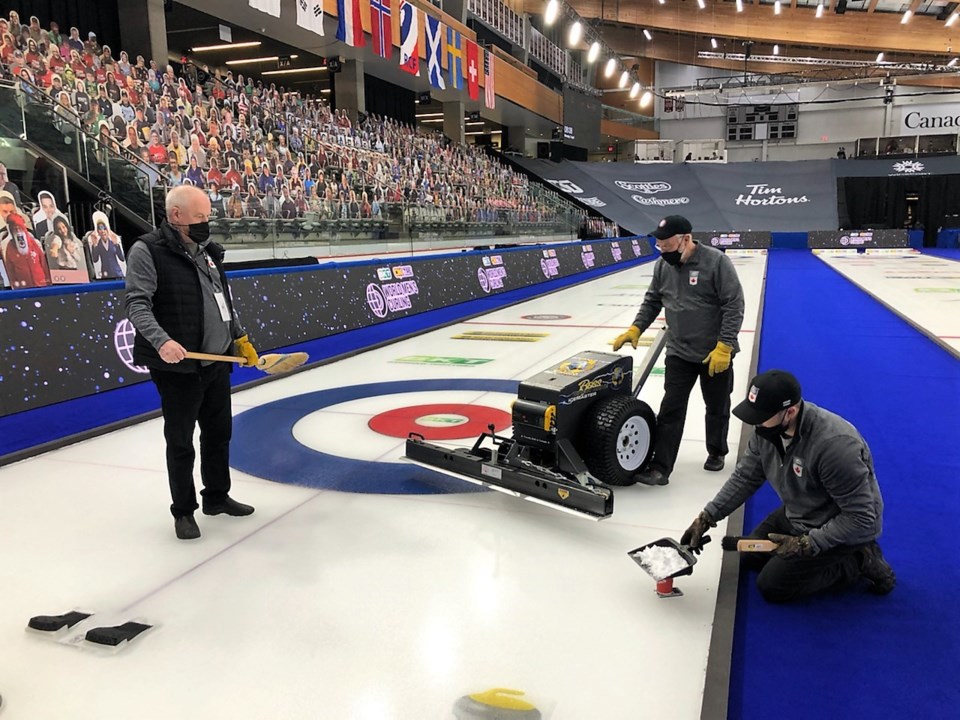 Post-retirement, a Simcoe County man found a talent for ice-making.

We spoke with Eldie Benson, 64, ice-maker for the Collingwood Curling Club.

Q: Have you always lived in Collingwood?

A: I was born in Collingwood in 1957. The hospital in Markdale hadn’t been built yet, and we lived in Flesherton. We lived there until about 1964.

Then we moved to the big city of Toronto to make our fame and fortune.

Q: What brought you back to the area?

A: I sold that business and retired 14 years ago.

My mom and dad built a house in 1995, south of Nottawa. My brother and I helped them build it, anticipating that someday we’d retire up here.

My mom had hip and knee surgery, so we bought the house in 2000. My wife and kids moved up here then, and I stayed in Toronto. I sold the business in 2007 and migrated up here then.

Q: What was your business?

A: We had a transportation business for the film industry. We worked on all the big films in Toronto. We supplied a lot of the equipment and food trucks, lighting trucks. Anything on wheels, we owned it and rented them to productions.

I also worked as a lighting designer.

Q: At what point did you start making ice?

A: I started making ice in 2009. I had never curled before in my life. My wife was just starting, and my son was on a curling team at Pretty River Academy.

I was sitting on the couch, looking for something to do. I got 'volun-told' to drive the kids to one of their games. After the second game, I thought maybe I should understand a little bit about this.

My darling wife bought me a book called Curling for Dummies.

I starting curling that January, and in February the local ice-maker in Collingwood, Dick Farrow, decided he wanted to retire. I started helping him in March and took an interest in it. I did some schooling and took a real shine to it.

The Ontario Curling Association runs two to three ice-making courses a year and there are different levels.

While I was in Calgary recently, I just got certified to Level 4.

Q: While you were in Calgary, you were making ice for some world curling events. Can you tell me about that experience?

A: I was there for four events: the Canadian Mixed Doubles, the World Men’s Competition, two Grand Slams, and I stayed to help put the ice in for the World Women’s.

Q: How did these opportunities come about?

A: (laughs) You have to be fairly persistent!

This sport is really labour-intensive. If you’ve got a strong back and a weak mind, you’ll fit right in. (laughs)

Q: Do you have other hobbies?

A: I was on the board for the (Collingwood) Fair for a few years. I was a director there for eight years.

It’s the same as any job. It’s the people you meet that make the job interesting. That’s where a lot of the fun comes from.

Q: You came back to the Collingwood area to retire, but it seems you’re keeping pretty busy. Do you have any plans to slow down in the future?

A: I’m retired now to the hours I used to put in. (laughs)

I’ll slow down when they kick some dirt over me.

A body at rest stays at rest, and a body in motion stays at motion. As long as you can stay in motion, by God, that’s the place to be.

Q: Is there anything else you’d like people in Collingwood to know about you?

We usually have two weeks of tryouts at the beginning of every curling year. Come out and try it. You’ll be amazed at how much fun it is.

It’s the people. The people make it more fun than the game, but the game is quite fun as well.