Barrie traded Tucker to Flint, along with Riley Piercey, in January for Evan Vierling and two second-round picks
0
Feb 24, 2020 3:30 PM By: BarrieToday Staff 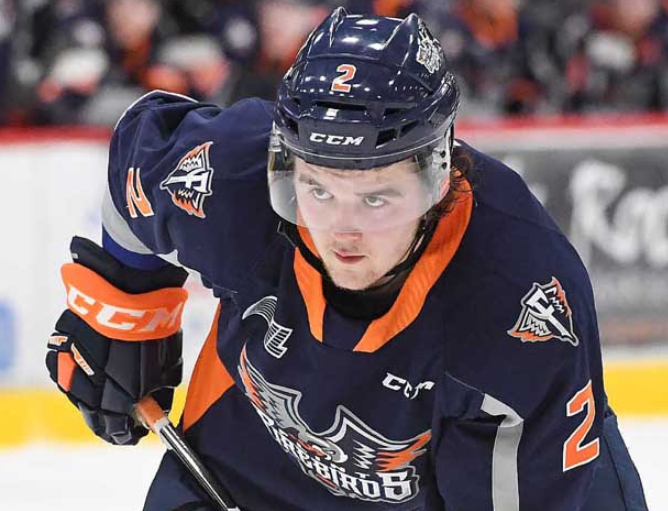 The Ontario Hockey League today announced that St. Louis Blues prospect Tyler Tucker of the Flint Firebirds is the OHL ‘On the Run’ Player of the Week with 11 points in four games including three goals and eight assists along with a plus/minus rating of plus-4.

Tucker joins Firebirds teammate Riley McCourt as the second defenceman to claim the honour this season, marking the fifth different occasion that a Flint player has been recognized. Tucker's 11 points over an extended week that included a Family Day holiday on Monday led the League as Flint's club record-setting winning streak reached 15 games.

Tucker set a new Firebirds record for points by a defenceman in a single game on Monday, racking up seven consisting of two goals and five assists in a 12-7 road win over the Sarnia Sting. He chipped in with an assist in Thursday's 4-0 road win over the Niagara IceDogs before scoring his 16th goal of the season and picking up a helper in Friday's 6-3 victory over the Mississauga Steelheads. Tucker and the Firebirds saw their 15-game winning streak snapped back at home on Saturday as the defender collected an assist in a 4-1 loss to the Kitchener Rangers.

A 19-year-old product of Longlac, Ont., Tucker sits seventh among OHL defencemen with 53 points (16-37--53) over 49 games between Flint and Barrie this season. The fourth-year veteran has registered 24 points (8-16--24) over 21 games since being acquired by the Firebirds on January 7th. A former first-round (14th overall) pick of the Barrie Colts in the 2016 OHL Priority Selection, Tucker has recorded 149 points (34-115--149) over 238 career regular season contests. He was a seventh round (200th overall) pick of the St. Louis Blues in the 2018 NHL Draft. Tucker made his professional debut last spring, appearing in two regular season games with the AHL's San Antonio Rampage.

Ferrier takes golf preparation into the basement after long drive from Florida
Apr 1, 2020 12:00 PM
Comments
We welcome your feedback and encourage you to share your thoughts on this story. We ask that you be respectful of others and their points of view, refrain from personal attacks and stay on topic. To learn about our commenting policies and how we moderate, please read our Community Guidelines.