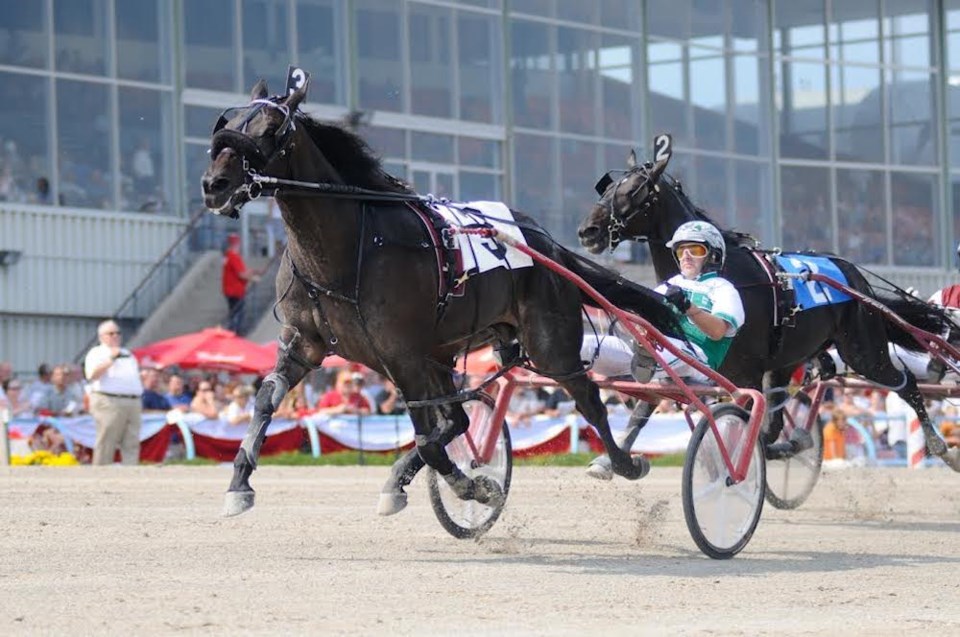 Hayek led off for the Ben Baillargeon stable, starting from Post 3 in the first $105,600 Gold division, and the E L Titan son made it look easy from the moment the wings closed on the starting gate.

Driver Sylvain Filion sent the gelding to the lead and Hayek rolled unchallenged through fractions of :28.1, :57.4 and 1:27.1 before opening up a five and three-quarter length margin on his peers heading for the 1:55.2 finish.

Your Still Up was promoted from third to second and Northern Sultan moved up from fourth to third after Port Perry made a late break in the stretch, crossing the wire second but being placed back to fourth.

“He was a lot smarter tonight than he was Monday when I won with him,” said Baillargeon. “I was a little bit anxious to see how he was going to behave himself, you know. He looks like he’s fast enough, but he’s still racing against better horses like Port Perry and company, but he was well behaved and Sylvain said, ‘Geez, he was well-behaved and he was very good, very nice’. He asked him to go a little bit and he just went.”

The Guelph-based trainer shares ownership of Hayek with Teresa Davidson of Milton, Santo Vena of Brampton and Nunzio Vena of Bolton, ON. The partners acquired the trotter on June 8 and Hayek has now delivered two wins and $60,300 in earnings to his delighted new owners.

In the second $106,400 Gold Series division, HP Royal Theo and driver Louis-Philippe Roy lined up behind Post 5. Roy eased the fan favourite away from the starting gate, allowing Horse Trader and Hot Wheelz to battle to the :28 opening quarter, and then sent HP Royal Theo to the front. Like his stablemate, HP Royal Theo was unchallenged through a :57 half and 1:26.1 three-quarters, and sailed home to a three and one-quarter length win in 1:54.1.

“He’s a fast horse and he’s a lot more mature this year and everything,” said Baillargeon. “He’s pretty smart, like he could have ducked in in the four-hole, but I told Louis, ‘Take your time, but don’t duck. You’re the best, drive him like you’re the best, but take your time at the gate.’ And he’s getting to be very smart and very good.

“I couldn’t ask for anything better right now. If I can keep them both like that, with their head on their shoulders, we’re going to have a good summer.”

“You need some of them to pay for the ones we don’t see. I have some in the field, so it’s nice to get some to pay for them. It’s a wheel you know, it’s a big wheel. These two will keep the wheel turning for a while anyway, let’s put it this way,” said Baillargeon with a chuckle. “I have broodmares and I have all kinds of stuff too. Monsieur Hamel is the same thing, and Santo (Vena), he’s the same thing. We dabble in about everything there is about the sport, so you need to get a few like that sometimes.”

The next Gold Series event for the three-year-old trotting colts and geldings takes place July 21 at Woodbine Mohawk Park, so Baillargeon said Hayek and HP Royal Theo will make one overnight start before continuing their Ontario Sires Stakes campaign.

Georgian Downs will host its second Ontario Sires Stakes event on Saturday, July 11 when the two-year-old trotting colts will make their Grassroots debut.