Collingwood Blues skating into the unknown this season

'The people who would be most devastated by not having a season is the players,' said Blues owner David Steele, who remains optimistic there will be an OJHL season this year
Sep 7, 2020 4:00 PM By: Erika Engel 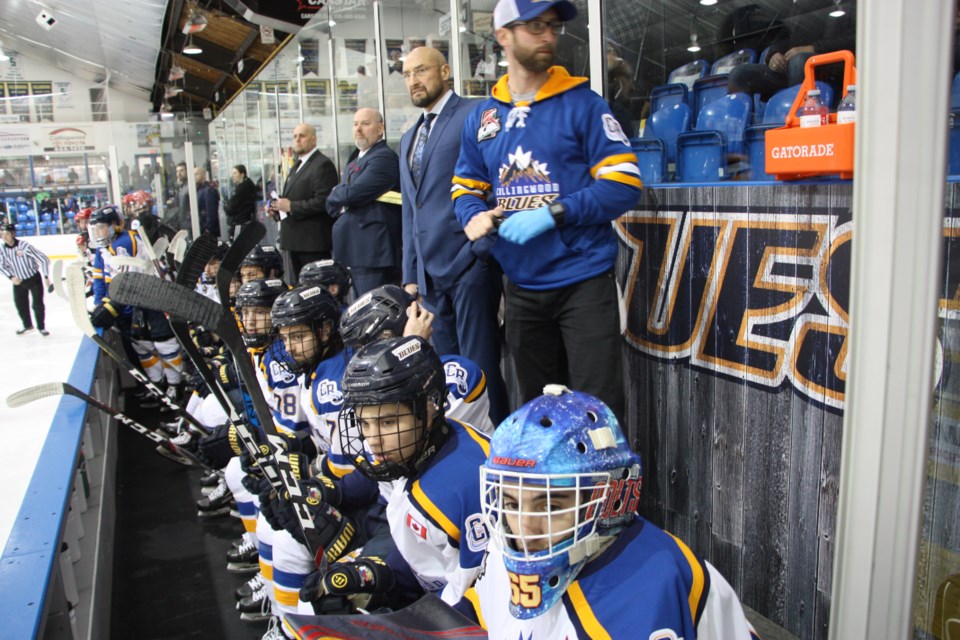 A photo taken during the Collingwood Blues (formerly the Colts) 2019/2020 season. This photo was taken before COVID-19. Erika Engel/CollingwoodToday

The Collingwood Blues players began arriving in Collingwood this weekend and will start on- and off-ice training right away.

There are a lot of governing bodies involved in triggering the start of hockey game season, including Hockey Canada and the Ontario Junior Hockey League (OJHL).

The Blues also have to abide by the rules set out by the Town of Collingwood.

“We’re hoping in the near future we’ll be allowed to play some games in the municipality,” said Tarantino. “I think a big indicator is going to be how school goes. If we do well with school numbers, I think you’ll start to see other things happening.”

Team owner David Steele says he expects there will be a season, even if it is an altered one. He’s staying optimistic and expects to welcome fans back to Blues games at the Eddie Bush Memorial Arena.

“We are prepared to start without fans if we have to,” noted Tarantino. “We’d prefer to have fans.”

Last year, the Blues had the biggest home-game crowds in the league.

The team’s ownership has put $50,000 worth of renovations and rebranding into the downtown arena to change from the former Colts name to the current Blues name. They’ve also renovated the players’ change rooms and coaches’ rooms.

“We’re trying to sustain normalcy,” said Steele, noting he expects to be able to welcome back at least season ticket holders and founder’s club members for games this season.

Albeit, there are new protocols in place to mitigate COVID-19. Each player will be tested for COVID as they arrive in Collingwood.

“The people who would be most devastated by not having a season is the players,” said Steele. “For a lot of them, it’s their vocation, their futures, their careers.”

Tarantino said the Blues have hosted summer camps for local minor hockey players at Central Park Arena and they have gone well. Anyone attending the camps had to arrive to the arena mostly geared up. Change rooms were closed and participants would put on skates and helmets in the lobby before getting onto the ice. They wore masks all the time they were not on the ice.

He expects the Blues will follow similar procedures once they start practices at Central Park Arena.

Eddie Bush Memorial Arena doesn’t have ice in it yet.

“We have to adapt or we don’t play,” said Steele. “For the Blues, it’s just not an option not to play. Whatever is required, we’re going to do it.”