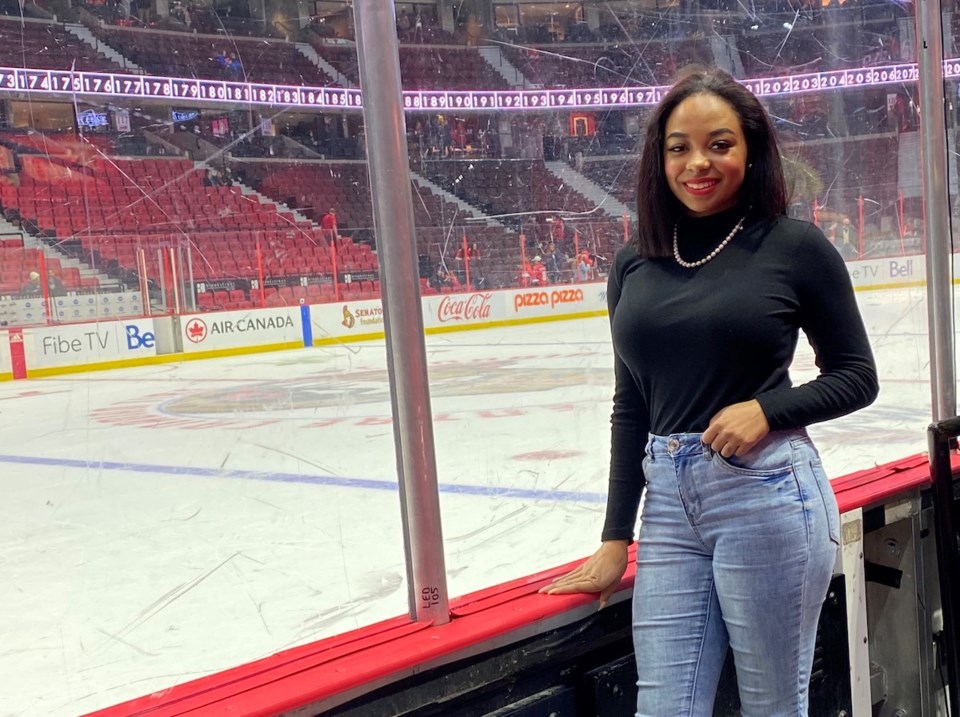 Barrie native Kiana Scott was hired by the Erie Otters as their new bantam scout in early March, becoming the first female scout in the Ontario Hockey League. Photo supplied

Editor's note: As 2020 has come to a close, we are taking a look back at some of our top stories of the year. The following story was originally published on April 8.

With three minor hockey games to scout that Sunday, Erie Otters general manager Dave Brown and assistant director of hockey operations Scott Grieve were headed out on a trip that would see them zigzag across Toronto and then up to Richmond Hill before heading back to the city.

Looking around the rink at their first stop they noticed the girl in the headphones, but their attention went quickly back to the game. Up to Richmond Hill and there was Kiana Scott once again.

Back to Toronto for the third game and again the Otters brass found Scott sitting in the seats.

"That night, the roads were bad and she made it to the next rink and I was like, 'OK, what is going on?'," Brown added.

Two weeks later and on another scouting trip, they see Scott again in the rink.

Grieve introduced himself to the Barrie native and it wasn't long after that Scott, who was doing some scouting for International Scouting Services at the time, was hired by Brown as the Otters new bantam scout in early March and thus became the first female scout in the Ontario Hockey League.

"They were just like 'Why is this girl always here?'," the 20-year-old said with a laugh in an interview with BarrieToday. "Other people would say it, too, like 'Who is this chick?' It was funny.

"I was literally everywhere," she added. "I pretty much lived at the rink."

Brown, who was looking to start a bantam component of scouting that would allow them to get a head start on young prospects ahead of their draft year in minor midget, soon sat down with Scott and it was pretty clear she was a good fit for the OHL organization.

"She's got an incredible work ethic," Brown said of the Barrie native, who grew up playing hockey with the Barrie Sharks and in Barrie minor hockey system. "For me, I don't know how good of a scout I am, but if I know I get out enough it's going to come to me. The key is making sure you get to games because that's where the answers are. She was all over. She's got an incredible work ethic and she's pretty passionate, too, which makes a big difference.

"You don't get a lot of financial remuneration for the Ontario Hockey League. Scouting is not something you can live off, but it's definitely a step in the right direction for her if she wants to continue to scout."

Scott, who quit two jobs a year earlier to focus on scouting, was with her mom when Grieve offered her the job.

"I was like, 'Look who messaged me?'," she recalls. "My parents have been so supportive through the entire journey. Everyone asks me how did you get into it, but no one really says I want to become a scout one day. When I told my parents, there were like, 'OK, so that's going to be a little bit tricky, but good for you and we'll follow you along this path.'

"Then when Erie contacted me and ... I got the call I got the job, I was blown away I was able to accomplish that, especially at such a young age. I thought it would take me a while to get there, but I guess they saw how hard I wanted it and I how hard I would work for Erie, so they took a chance on me."

Brown and Grieve didn't realize they were hiring the first female scout and its significance until someone pointed it out. For the Otters general manager, that had nothing to do with them bringing her into the organization.

"(Grieve) and I said that's not why we're doing it," Brown explained. "We're doing it because she's everywhere. How we found her was not by a traditional resume, but more through just pure work ethic and determination to get out to the rinks. ... It was what she did and not who she was or what her gender was.

"It was simple, pure work ethic to what she was doing. There could have been five other people who did the exact same thing and she did we would have talked to all five, but at the end of the day, she was the only one that we kept noticing."

Hearing those words from Brown means the world to Scott, who knew she wanted a career in hockey and just didn't know doing what until she pretended to scout her brother's rep games when she was younger.

"Him saying those things about me really just blew me away," she said of Brown. "Someone that has looked past me being a female as well; that was kind of an issue in my journey."

Scott hopes she can pave away for other young girls looking to follow their dreams in the game of hockey.

"I really hope that other girls will have hope that they can do that job, too, because I never thought as a female I would get the same opportunities," she said. "Looking past all of my journey from learning to be a scout and taking courses all the way to now, it finally did pay off.

"But there were definitely struggles with different teams and organizations that didn't want to give me the chance," Scott added. "If you keep on working hard, it does pay off."

As for the type of player Scott looks for, she doesn't hesitate.

"I like a dynamic player," she said. "Someone who can play all aspects of the game. Character is a big one for me, and also hockey sense and skating. Those are the three main ones."

"It was such an emotional moment for me, just because some of these kids I've watched since their bantam year," she said. "So it's like, I feel kind of proud of them."

Brown said they found themselves a worker in Scott, someone willing to learn and eager to get going.

"Kind of where we are, I like a succession plan," the Otters GM explained. "If there was an opportunity moving forward at the minor-midget level then probably we'd look to her before we look outside.

"She's eager and she fits all the criteria."

About the Author: Gene Pereira

An award-winning journalist, Gene is former sports editor of the Barrie Examiner and his byline has appeared in several newspapers. He is also the longtime colour analyst of the OHL Barrie Colts on Rogers TV
Read more