What the heck is a Shoe Tree? 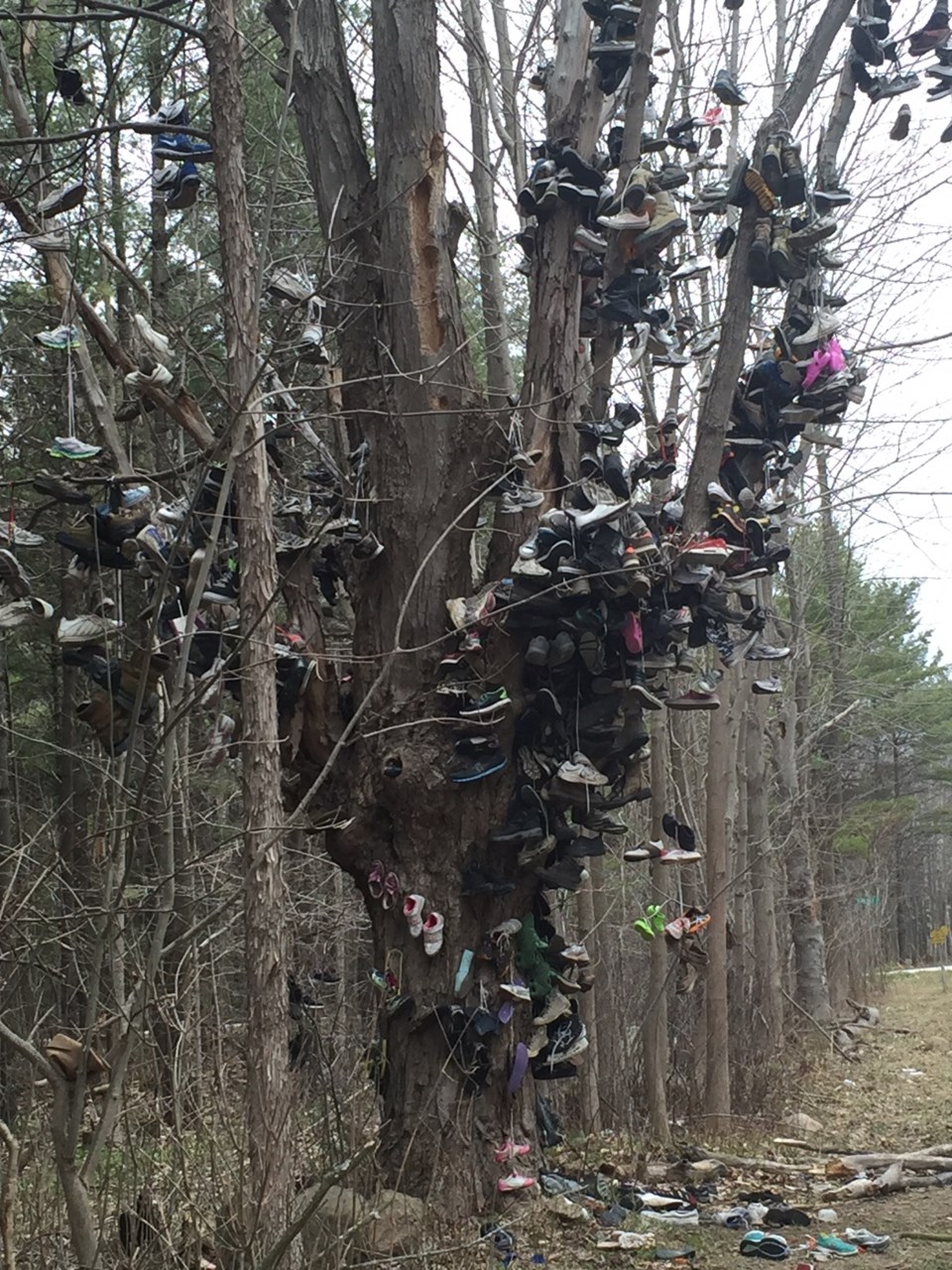 The Shoe Tree is located on Crossland Road and Flos Road 3 in Springwater Township. Sue Sgambati/BarrieToday

It's an eyesore to some and magnificent landmark to others.

Either way the Shoe Tree has traction.

The huge maple on Crossland Road in Springwater Township is adorned with all kinds of footwear, some dangling by laces, others fixed to the bark.

Driving by, you can't miss it and there's a good chance someone will be stopped to look at it or take a photo.

Stories about how long it's been there, who started it and why are as many and varied as the shoes on the tree.

There are a number of Shoe Trees around the province and French says people now carry extra pairs of shoes so if they see one "they throw it up there."

He thinks most of the shoe trees start just for fun with someone tossing up a pair of shoes, the laces catch in a tree and then more follow.

There's a story online that in the U.S. one apparently started with a little tiff on a wedding night between a bride and a groom.

The story goes the bride got mad and threw his shoes up in the tree.

Sometimes it's some sort of memorial for someone's tragic passing but Mayor French says that doesn't seem to be the history of the Springwater Township Shoe Tree.

So what is the history?

Over at the Elmvale Branch of the Springwater Library, part-time librarian Ginger Tsang says she has solved the mystery.

"I did some digging around online and determined the tree was started by a family in Wasaga Beach in 2009," Tsang reports. "When you came to stay at their cottage you would throw a pair of shoes in the tree.  They just wanted to start something different and funky because a lot of their guests came from Toronto area so I'm thinking they'd be driving by that tree and say hey there's my shoes."

It was a simple thing that grew out and beyond what the family had originally intended, says Tsang.

About two years ago the tree got full enough that people branched out to other trees beside.

Tsang lives on Crossland Road and remembers when it started.

"I would see a few shoes in the tree and think, okay that's kind of funny and strange," said Tsang. "Then people were chucking skates in it, rubber boots, all kinds of stuff. Sometimes it can get a little junky because people miss."

The tree is on Simcoe County property, the larger of two such trees in the area.

Christian Meile, Director of Transportation Engineering for Simcoe County doesn't know when the Crossland Road display started or why.

"I've been at the county for 13 years and it certainly wasn't there when I started here. I can tell you that," said Meile. "I don't know at what point it showed up. I have no idea what this signifies or if the kids use it as a party place. I don't know what it means."

There have been no complaints to the county about the tree and the mayor says it's not a traffic hazard.

French feels the tree brings an "uplifting kind of spirit" to people in the already scenic canopy of trees through that stretch of Crossland Road.

He has heard some grumblings that the Shoe Tree is an eyesore but notes more people find it interesting and talk about it.

"I've even heard of one young lady, her father passed away, she threw his shoes up there and she stops and visits and talks to him," said French. "As far as when did the first shoes go up there? Nobody can tell me. It certainly is an interesting and growing attraction. It's pretty neat."

Area distillers shift gears from spirits to sanitizers
Mar 31, 2020 8:00 PM
Comments
We welcome your feedback and encourage you to share your thoughts on this story. We ask that you be respectful of others and their points of view, refrain from personal attacks and stay on topic. To learn about our commenting policies and how we moderate, please read our Community Guidelines.