Retailer teams up with Canadian board game company to create 70 municipality-themed limited-edition versions of Monopoly
Jun 16, 2020 1:45 PM By: Jessica Owen 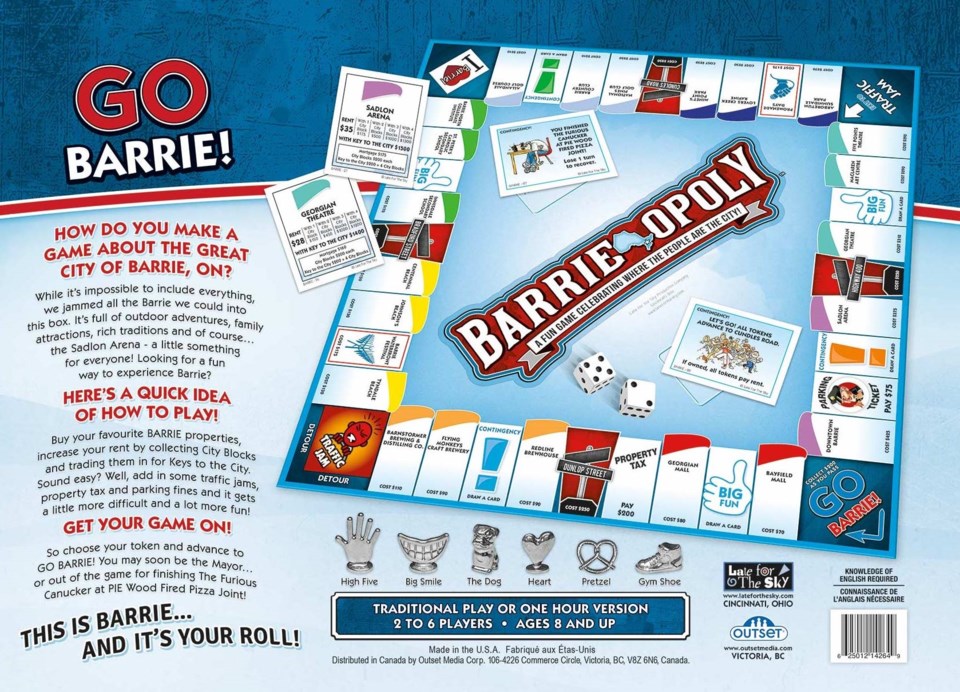 Barrie-Opoly is being shipped to both Barrie Walmarts as a limited-edition hyper-local spin on the classic board game Monopoly. Contributed image

Roll the dice and take a walk along Barrie’s biggest attractions without leaving the comfort of your home.

Barrie-Opoly, a new board game being released by Outset Media in partnership with Walmart Canada, is being released this week at both Barrie Walmarts and online, but only 1,000 copies have been printed and once they’re gone, they’re gone.

“Walmart came up with the idea. They wanted to celebrate the different communities they’re in across the country and they approached us as we’re Canadian owned and operated,” said Jean Paul Teskey, senior vice-president of Outset Media.

Outset Media is a Canadian privately held wholesale supplier and manufacturer of toys, games and puzzles based out of Victoria, B.C.

Landmarks that are featured in Barrie-Opoly include the MacLaren Art Centre, Georgian Theatre, Allandale Golf Course, local businesses such as Flying Monkey’s Brewery and local schools such as Barrie North Collegiate Institute.

This is the second run of municipality-specific versions of Monopoly created by Outset Media.

According to Teskey, in the first year they focused on major cities such as Toronto, Montreal and Vancouver.

However, the best seller of the first run surprised them all.

“Our best-selling game last year was Sarnia-Opoly, by far,” said Teskey. “So this year, our selections are more mid-size cities that are a little more hometown-proud. We’ve had great success.”

Barrie is one of 70 communities across Canada that will be seeing a hyper-local version of famous game hit store shelves. The local versions are also officially sanctioned by Parker Brothers.

Teskey, who is based out of Toronto, makes frequent trips to Barrie so he assisted the designers and researchers in choosing the Barrie landmarks and events to be featured in the game.

“It’s not really a big money-making venture. It’s meant to celebrate, with Walmart, the different communities they’re in across Canada,” he said.

Barrie-opoly will be sold at both Walmart locations in Barrie.

“They should be in stores in the next day or so,” said Teskey.