Ted Roop says it’s fortunate that he enjoys being up when most of us are still sawing logs
Apr 3, 2017 7:00 PM By: Glenn Wilkins 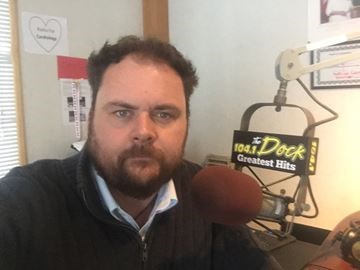 Ted Roop has brought Simcoe County’s residents out of their beds with a for nearly 15 years, the last few of them providing a stiff jolt of rock and roll as the morning man on The Dock 104 in Midland.

“My body has conditioned itself to know when to sleep and when to be awake. I usually have a pretty solid nap in the afternoons, and when I miss that nap... my body lets me know! I LOVE having my afternoons free and I love being home when my kids get off the bus.”

The Dock boasts "the greatest rock and roll of all time", and for Ted Roop, there’s no one like the Tragically Hip.

“I've had the opportunity to see the Tragically Hip more times than I can remember. This past summer, I was lucky enough to get tickets to their Hamilton show. It was the BEST concert I've ever seen. First loves, first breakups, first dates, first car... they all have a memory with The Hip. My first date with my wife Lisa was to a Hip concert in Detroit and it's something I'll never forget.”

Lest anyone think that Ted has “the perfect face for radio,” here’s a reminder that Roop has appeared in front of the camera.

“I did indeed do quite a few TV commercials and a few movies as a kid, and I look back at that experience and wish I had pursued that more. As a kid, I feel like I kind of 'grew out it' because I wanted to do more 'kid stuff' and be like everyone else, now I wish I stuck with it more.

“For some reason now, I'm afraid of the camera! I guess it's all those years of just talking to a mic, where no one could see me. It's definitely something that, if the right opportunity presented itself, I'd pursue it again.”

Early April is Juno Award season, and Ted Roop is effusive about the state of Canadian music, particularly country.

“The talent that you see there is amazing. You've got artists like Gord Bamford, Dean Brody, Doc Walker and The Road Hammers that have been making amazing music over the last decade.

“Then in the past few years artists like Dallas Smith, Jess Moskaluke and Brett Kissel have emerged. Then, more recent acts like Washboard Union, Meghan Patrick and Madeline Merlo. Country is in a good spot.”

Nor does he stint on his enthusiasm for artists in the rock field.

“Local (Orillia) boys Bleeker have accomplished a lot. Monster Truck, Sheepdogs, The Strumbellas and Arkells have carved out a huge following. You have bands like Nickelback, Big Wreck and The Trews that are still making amazing music.”

Ted admits getting his “pop fix” from Grace, his 12-year-old daughter.

“Because of Grace I have artists like The Weekend, Drake and Walk off the Earth on my iTunes now.”

What’s more, fans beyond the county can hear Ted introduce them to artists on the nationally-syndicated “Canadian Country Spotlight”. He admits many of his interview subjects have become friends.

“Aaron Pritchett and Jason McCoy has always been great guys to interview. Chris Thornsteinson and Dave Wasyliw from Doc Walker LOVE to joke around and have always been fun to interview. Watching Brett Kissel's star rise has been a lot of fun. I can't say I really have a favourite because all of them are great. Whenever I finish interviews at the CCMA's, I always think to myself 'Wow, I love my job'!”

Good morning, Barrie!
Jul 6, 2020 6:00 AM
Comments
We welcome your feedback and encourage you to share your thoughts. We ask that you be respectful of others and their points of view, refrain from personal attacks and stay on topic. To learn about our commenting policies and how we moderate, please read our Community Guidelines.