Vertigo grappling with a leap into the big time

Does Vaughn Vertigo have the look, skill set and perseverance to become WWE’s next star?
Oct 8, 2018 8:00 AM By: Tyler Evans 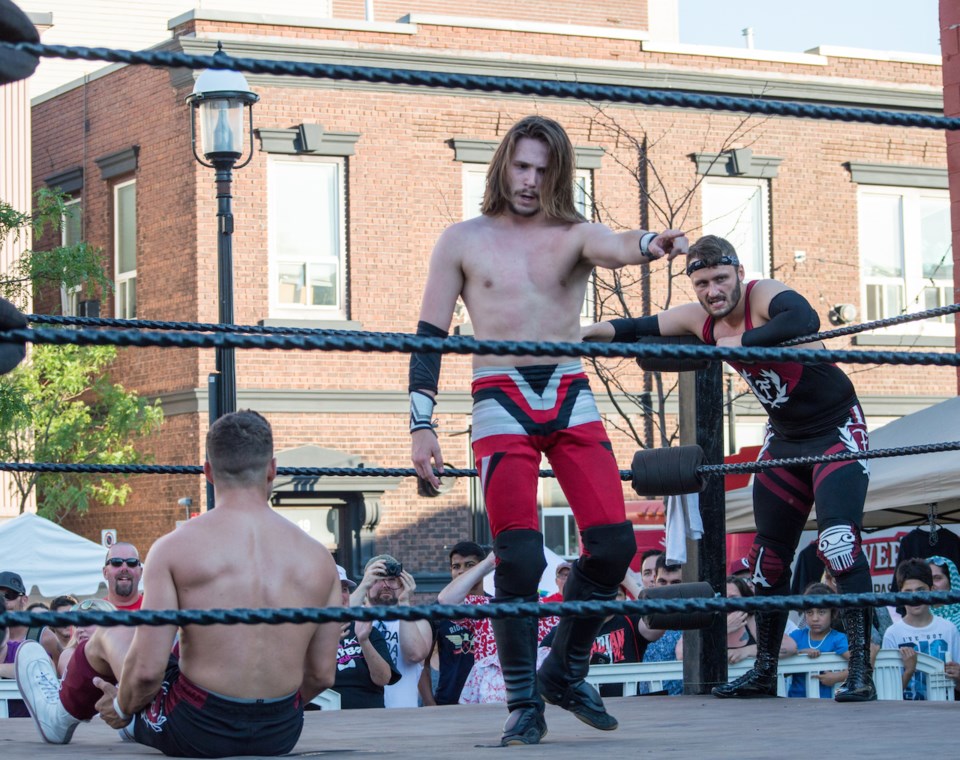 Vaughn Vertigo plays to the crowd during a Barrie Wrestling event in downtown Barrie. The up-and-coming star is still looking for his big break. Tyler Evans/OrilliaMatters

Barrie Wrestling’s Vaughn Vertigo has the look, the skill set and the perseverance to become WWE’s next star.

At just 22 years old, Vertigo’s high-flying skill set has impressed wrestling fans from Barrie all the way to the United Kingdom, where he is booked to compete next month.

No matter how far wrestling takes Vertigo, he will always keep in mind where his roots are.

“Barrie is one of the first companies who took a chance on myself and my tag-team partner, Gabriel Fuerza,” Vertigo told BarrieToday.

The beginning sagas for Vertigo in Barrie saw far more losses than wins, but he says it was the fans that changed his fortune.

“They (Barrie fans), wanted to see me progress, and that’s how I got my break.”

Vertigo says he enjoys performing in Barrie as much as any other city he has worked in, because of the special atmosphere and the demographic the company targets.

“Some shows we work aren’t a family-friendly crowd. Barrie Wrestling is always family friendly and it’s a lot more fun because the wrestling is all about the kids and giving them a fun time,” said Vertigo.

Recently, Vertigo has been wrestling alongside his best friend, Fuerza, who has been beside Vertigo through his entire wrestling career.

“Fuerza and I started training in the Durham Region when we were 14. He would take the bus home from training everyday and jokingly mentioned that he could use a ride home, so my dad and I offered to give him a ride, and after spending lots of time together in the car, we eventually became best friends,” Vertigo explained.

Vertigo said it was never planned for him to be partnered with Fuerza in tag-team action, but booking managers just couldn’t help it because of their natural chemistry.

Together, the tag team travels all across Ontario and is known as ‘Fight or Flight'. They are one of the independent wrestling circuit’s most exciting tag teams.

Their in-ring styles fit well together, and the fans leave their seats when their highly popular theme song ‘Danger! High Voltage’ by Electric Six sounds around the arena.

“I think fans enjoy the song, because it’s kind of weird. A lot of wrestlers, come out to tough sounding music, like hard rock or heavy metal. When we come out to Danger! High Voltage, it makes us a little bit different and we’ve kind of made our characters fit the song,” said Vertigo.

Vertigo and Fuerza are on the look out for an opportunity to get noticed by a big-time promotion.

However, Vertigo has learned from the likes of WWE stars Daniel Bryan and AJ Styles that the call to the big time might take longer than they’d like.

Vertigo has a simpler goal in mind.

“For now, I’d love to keep travelling the world while wrestling. And when the time is right, and I feel comfortable and confident enough to go to the next level, I will,” he said.

Vetigo and Fuerza, ‘Fight or Flight’, will be in action at Barrie Wrestling’s, One Vicious October show on Saturday, Oct. 13 when they take on The Pillars for the 400 North tag-team championships. Bell time is at 5 p.m. and the event will be happening at 49 Ferris Lane.