'Unsightly monolith' to be debated at public meeting Tuesday

The 34-storey condo would be tallest building in Barrie's history; 'Development will have a huge and positive impact,' on area, resident says
Oct 17, 2020 1:30 PM By: Bob Bruton 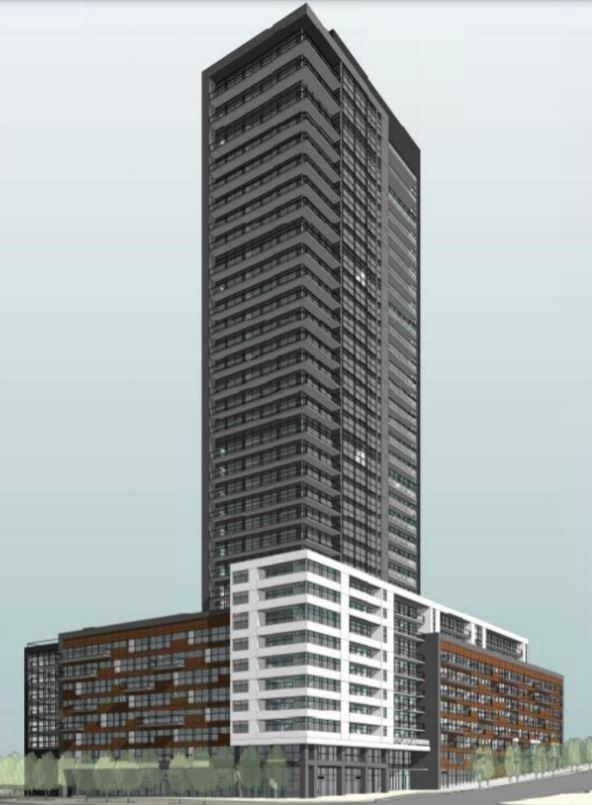 This is a rendering of what a development proposed for the northwest corner of Bayfield Street and Sophia Street West, while also fronting onto Maple Avenue. The 34-storey building would be Barrie's tallest. Contributed photo

What could be Barrie’s tallest building ever is the subject of a public meeting Tuesday.

A rezoning could result in the development of a 34-storey, mixed-use condominium with eight townhouses and ground-floor commercial space at 136 and 112 Bayfield St., 113 and 115 Maple Ave. and 14 Sophia St.

So far, reaction to the development has been mixed from area residents.

Wendy Cook said she is excited by the proposal.

“This development will have a huge and positive impact on the entire neighbourhood,” she said in a note to the city.

But Janet Ness has a number of concerns, including the project’s size and density.

“I can’t understand council’s reasons to consider giving approval for a 34-storey condo tower which will not only be totally and majorly out of proportion with current ‘high-rise’ buildings standing in the downtown/waterfront core, but will also be totally out of place standing at the foot of our surrounding historic and residential areas,” she said in a letter to city planning staff.

“You will see that single tower sticking straight up in the sky three times higher than any other building in the downtown core and surrounding neighbourhood and it will stand out as an unsightly monolith,” Ness said.

A mid-August neighbourhood meeting on this project was attended by approximately 30 residents who made comments about increased traffic and safety concerns on area streets, the impacts of shadowing and loss of privacy on surrounding single-family homes due to the building’s height, the visual impacts to the downtown skyline, how emergency services would operate there, increased population and more demand for city services and facilities, and a desire to see affordable housing units included in the proposed development.

The developer, Rockap Holdings, is also seeking site-specific provisions to permit a reduction in the building setbacks, landscaped open space, parking and driveway lengths - as well as an increase in building height, gross floor area, lot coverage and the area ground-floor commercial uses.

There would be 480 residential units, more than 1,000 square metres of commercial space and the townhouses would front onto Maple Avenue.

This 2.18-acre property is located at the northwest corner of Bayfield Street and Sophia Street West, while also fronting onto Maple Avenue. This land is occupied by a commercial office building, a large surface parking area and a single-detached home which has been converted to commercial uses.

This property is designated ‘City Centre’ in the Official Plan, is in the Urban Growth Centre and the Bayfield Street Primary Intensification Corridor.

A public meeting is one of the first stages of Barrie’s planning process. Following the public meeting, this rezoning application will go to planning staff for a report and recommendations that will be considered by planning committee, and city council. Planning staff are targeting the first or second quarter of 2021 for that report.