TIFT production celebrates its 500th performance in Brisbane and drew rave reviews from the critics
0
May 15, 2019 6:30 PM By: BarrieToday Staff 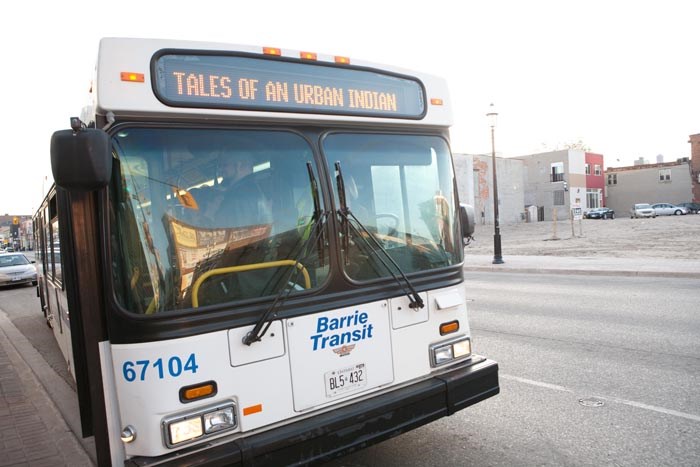 NEWS RELEASE
TALK IS FREE THEATRE
*************************
Talk Is Free Theatre (TIFT) closes the defining 17th season this week, with the Australian tour of Tales of an Urban Indian by Darrell Dennis. The production, staged on a moving city bus, recently celebrated its 500th performance in Brisbane and drew rave reviews from the critics.

Not only is TIFT ending the season on the other side of the planet, but it also began the year on the international scene, with its immersive odyssey, The Curious Voyage. This production was one of the boldest and biggest experiments in Canadian history - taking audiences, quite literally, from Barrie to London, UK as part of the three-day narrative.

At the same time, the five-production expanded local playbill in Barrie included two world premieres of works written by women in which they also starred - Newfle Electra by Allison Basha and Music For the Changing Voice by Alyssa Wright. There was also the Canadian premiere of an adaptation of the rarely seen play by Nikolai Gogol, The Gamblers and the rarely produced, in-your-face musical Hedwig and the Angry Inch, starring Barrie’s own David Ball. The season was rounded out with the widely produced interactive play Every Brilliant Thing, in association with the Royal Manitoba Theatre Centre.

This season, Tales of an Urban Indian also toured across the country, including stops in Vancouver, Halifax, Ottawa and Saint John. In addition, The Wedding Party by Kristen Thomson, in co-production with Crow’s Theatre, was part of the National Arts Centre English Theatre.

“I am thrilled by how much we were able to accomplish in terms of the scale, the geographic scope and the diversity of voices in our programming,” says Artistic Producer Arkady Spivak. “In all of this, I am also very happy with the critical reception, audience results and our organization’s financial performance, especially having doubled our budget this year.”

Talk Is Free Theatre (TIFT) was founded in 2003 in Barrie, Ontario, and has since produced 89 works. The company is Central Ontario’s only professional Equity company with a full winter season. TIFT produces a wide range of work from the periphery of mainstream, concentrating on new writing, forgotten classics and drastic re-examinations of established repertoire. TIFT is particularly dedicated to esoteric works of musical theatre and in forging new types of site-specific, immersive creation, among others. The company also tours nationally and internationally every season.