Alliston doctor says wire-bristle barbecue brushes can pose a serious threat when tiny strands of wire fall off and stick to grilled food. He has had to remove the needle-like bristles that became lodged in patients' throats
Sep 9, 2016 10:00 AM By: Robin MacLennan 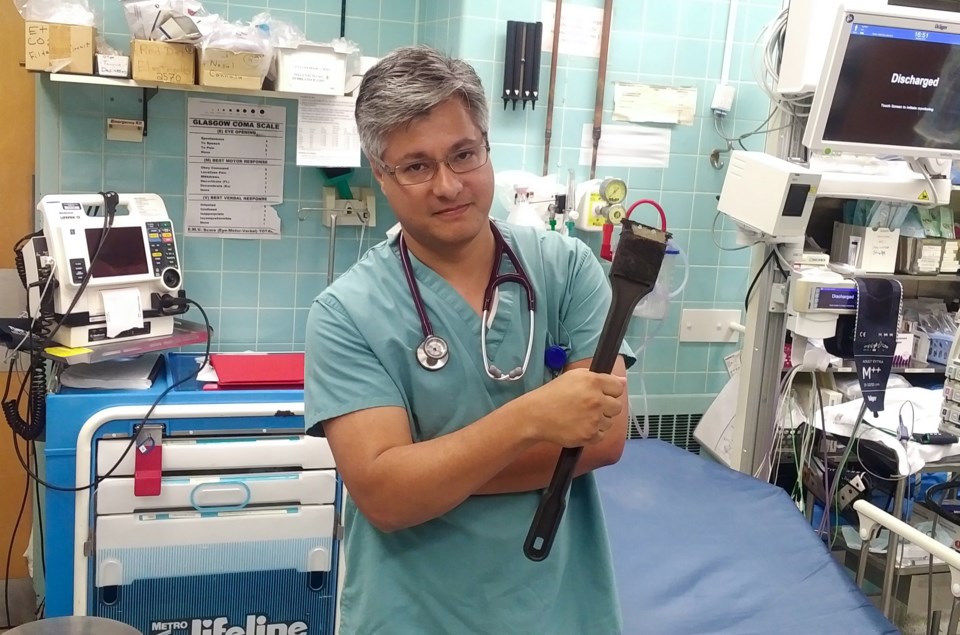 Dr. Oswaldo Ramirez, chief of staff at Stevenson Memorial Hospital, says wire bristle barbecue brushes such as the one he is holding, can cause a serious health risk when bristles fall off. Submitted photo

ALLISTON — Canadian surgeons are urging backyard cooks to throw out wire-bristled brushes, because thin, sharp wires can fall on the grill and then cling to food such as burgers, without being noticed.

When swallowed with a bite of food, the bristle can cause damage to the mouth, throat and epiglottis - a flap of cartilage that covers the opening of the windpipe when swallowing.

It can be an extremely painful and frightening experience.

Dr. Oswaldo Ramirez, chief of staff at Stevenson Memorial Hospital in Alliston, says he has had to remove bristles from patients' throats in the emergency department, but if the needle-like bristle travels into the intestine, the problem becomes more serious, or even life-threatening.

"When dealing with barbecue grill brush wires, the most concerning health issues arise with bristles that make it all the way down to the intestines," Ramirez said.

While sometimes foreign objects including the wire bristles can pass through without symptoms or injury, a single bristle can cause a life-threatening emergency.

There have been several cases at SMH over the years, and Ramirez said most were lodged in the patient's throat and were removed quickly.

"However the worst case was a patient that had the wire perforate his duodenum (small intestine) and had to be transferred to a surgical centre with an Intensive Care Unit (ICU)," he remembered.

"The difficult thing is that if you don’t have a savvy physician it’s very easy to miss making the appropriate diagnosis."

It's important when arriving at hospital with abdominal pain "to tell the doctor that you were grilling and not simply what you were eating,” he advised.

The issue of barbecue brush bristles has become so widespread that it came up at this year's meeting of the Canadian Society of Otolaryngology.

During a discussion on ingested foreign objects that are difficult to remove, several ear, nose and throat surgeons spoke about their challenging surgeries.

The conclusion at this year's meeting was that there is no "surefire" way to remove the bristles and physicians would prefer "just to prevent it from happening in the first place."

By urging people to throw their brushes away, surgeons are hoping the bristle brushes will be removed from the market.

And grillers using a wire bristle brush should "watch the grill, take a good look at it and make sure it’s really clean and free of any debris."

Supportive housing project likely not going ahead on Vespra St.
May 18, 2021 12:15 PM
Comments