This chocolate is good for you! 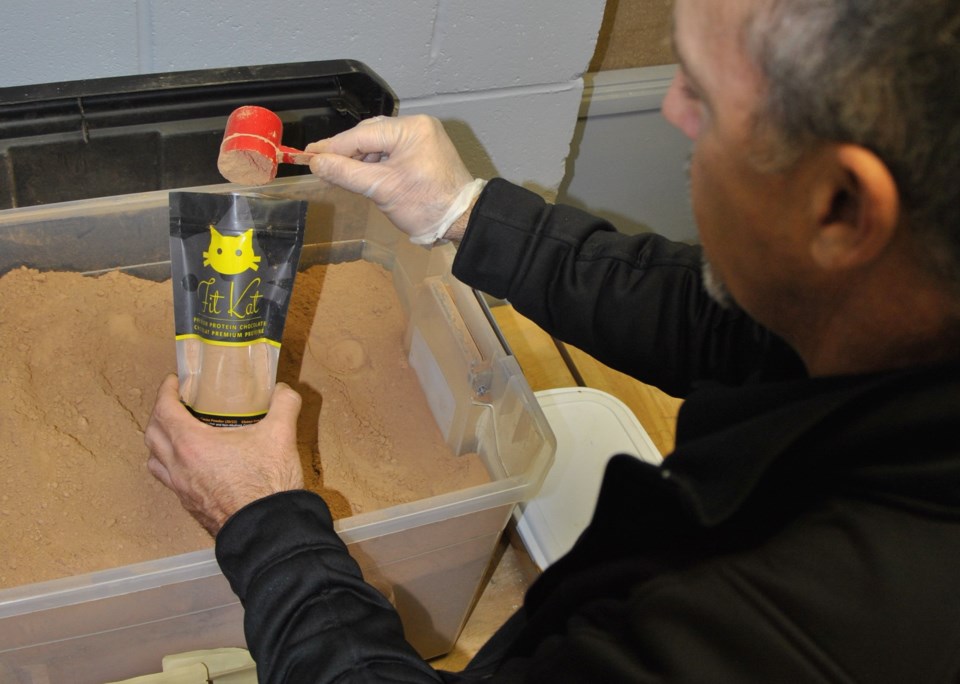 In his Barrie production facility, master chocolatier Kevin Richards packs rainforest-sourced cocoa and works with light and dark chocolate to make a variety of treats, including his newest line, Fit Kat, which features protein.

“Chocolate is a major superfood if it’s the right kind of chocolate,” said Richards, who has been creating indulgent truffles and treats since 2012, after graduating with honours from the Ecole Chocolat Professional School of the Chocolate Arts  and obtaining his maître (master) chocolatier designation in Belgium.

Using Amazon rainforest chocolate, he has been creating indulgent truffles and treats since 2012, first under the Theobroma banner. He now markets the indulgent varieties under his own name brand and online at mrchocolate.ca.

When he connected with his partner, Helen Richards – an award-winning fitness competitor and coach – he decided he had to find a way to make chocolate and protein work. Many times, the taste and texture just weren’t good enough.

But determination to help his partner succeed kept him working with different proteins and different chocolate tempering techniques to create a smooth chocolate/protein product that tastes good and is good for you.

He finally settled on a micro-filtered whey isolate that blends and doesn’t have a grassy taste.

He combines varieties of chocolate – which he considers a superfood on its own – with microfiltered whey protein from New Zealand cattle. It’s gluten and lactose-free. He adds caramel, sea salt and an orange flavour that when combined with white chocolate tastes like a creamsicle.

“When I told my mom it could replace meals, my mom said “breakfast, lunch and dinner chocolate’. My brother-in-law said (the first variety) tasted a bit like a Kit Kat, thus the name Fit Kat.”

He took some along to a fitness competition last year in the United States and caught the tastebuds of Inside Fitness magazine, which helped him expand in the Canadian market just after Fit Kat began production a year ago.

He’s now working on a sub-line Fit Kat Kids, and aiming it at time-pressured parents who turn to drive-thrus to pick up donuts for their kids on the way to hockey or soccer practice.

“You’re not going to have that sugar spike and then be depleted half-way through practice,” the former rep soccer player said. “Post work-out, it’ll give them the protein they need right away, so their muscles won’t get depleted.”

A peanut butter cup has 22 grams of protein and only 6 grams of sugar.

“It’s a meal,” he said, adding he has not yet tired of his product, which gives him the energy to keep his chocolate businesses shipping across North America and into Europe, as well as keeping up with his three kids, all under age 10.

“Our peanut butter cup weighs more than four regular peanut butter cups. Our chocolate is the highest source of plant-based magnesium. It’s got 40 times the anti-oxidants of blueberries and twice the calcium of cow’s milk. It’s lactose and gluten-free.”

Even type 2 diabetics can enjoy it, because it keeps blood-sugar levels steady, he added.

Richards’ chocolate creations can be found locally at Nutrition Plus, Cravings Fine Foods on Commerce Park Drive, Earth’s Emporia on Bayview Drive and at Pump’d  Supplements on Bryne Drive and in the Kozlov Centre.

Online, you can find him at fitkatchocolate.com and at mrchocolate.ca.