Women leaders shared ideas on how to recruit, mentor, develop, support and vote for women leaders among other relevant issues
May 29, 2019 6:00 PM By: BarrieToday Staff 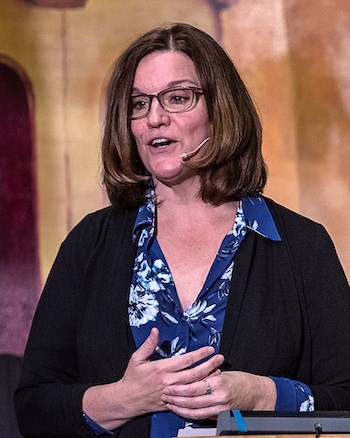 Five women leaders looked at various aspects of feminism today, how far we’ve come, and how the current generation might approach the path ahead. They referred to the Me Too and Black Lives Matter movements as examples of “feminisms” more focused today on equality, diversity and sustainability for all genders.

She explained that many women are still reluctant to become political leaders because they struggle with a lack of confidence both internal and external, and they are wary about the surprisingly violent abuse most women politicians face.

Despite such barriers and the huge distance women still have to go, Nash is optimistic on two fronts: she personally experienced the positive change in a more gender-balanced political caucus; and she is inspired by many talented young female leaders who feel they can’t wait to weigh in on environmental issues, growing inequality in housing, education, childcare, sexism, racism and violence.

In the second presentation of the Series, Dianne Martin, CEO of the Registered Practical Nurses Association of Ontario, reiterated that sexism and double standards are alive and well in Ontario.

She spoke passionately about developing women leaders and getting them to the tables where serious transformations are decided, where they can collaborate with integrity, tell stories about the impact on real people, and balance rising expectations for quality of care with safety and efficiency concerns.

Martin talked about a woman colleague who mentored her and was instrumental in forcing her out of her comfort level into leadership roles. She described some of the complexities of the nursing profession today, with crises looming because this female-dominated profession is undervalued and misunderstood.

Dr. Sylvia Bashevkin, author and professor at University of Toronto, looked at long-standing assumptions since Ancient Greece about how women are expected to approach leadership – to be calm, gentle, nurturing/maternal, weaker and conflict-avoiding, in contrast to stronger and sometimes violent men.

All four women were bold, assertive, aggressive leaders who were able to influence their respective presidents in directions different from the presidents’ military advisers of their time. Despite these commonalities, they had different backgrounds, political affiliations (two were Republican and two were Democrat, and they adhered to their party’s ideologies), espoused different strategies and differed in their willingness to support women’s groups.

The research indicated that all four grew up with significant responsibilities; “they were not socialized in a pink frilly dress,” she remarked. The four women leaders were all forced to develop resilience, poise, confidence and strong speaking and interpersonal skills early on, trained in politics at kitchen tables. Yet women still face a double bind: expected to be confident and assertive, but powerful persuasive women are not trusted to lead.

Debbie Pond, a retired RCMP Officer and founder of U - R Home, described the shocking volume of human trafficking today and the impact it has on its victims, often girls of 13 or 14, half of them indigenous.

Traffickers prey on vulnerable individuals for forced labour or the sex trade, luring them by selling a dream of love and security. Shame, fear of police, language barriers and fear of losing their children keep them enslaved.

If they are rescued, they need rehabilitation and re-integration, with the likelihood of suffering PTSD for a long time. At U-R-Home in York Region, Pond works with victims of human trafficking.  She encouraged people to talk about this hidden crime that occurs all around us, to volunteer, and to call 911 to stop it.

Maureen Judge, an award-winning filmmaker and teacher, provided an overview of women in film, starting with the origins of film in the late 1800s, and showing a clip of the first film directed by a woman, in 1896 in France.

Current statistics show that, even though 51 per cent of moviegoers are women, there is a ‘celluloid ceiling’, with only 25 per cent of the industry made up of women, and a very small number of women directors and producers. She demonstrated the importance of women telling stories about and for women with examples, using the term ‘female gaze’ as counterbalance to the fact that most films are made from a ‘male gaze,’ or a man’s perspective on what women are feeling.

Women directors have used film to reclaim history, telling stories such as her 1994 film about contributions women made during the First World War. Judge encouraged the audience to seek out the original and the 2019 re-imagining of Five Feminist Minutes on the National Film Board’s website. Her closing remarks were about what is most important in filming to her – to have respect for the subjects in a film, and to set scenes of intimacy in appropriate contexts.

Each speaker had suggestions for how we recruit, mentor, develop, support and vote for women leaders. The speakers were all confident that once women become leaders, they hold their own in making tough decisions with integrity.

In terms of women in leadership positions, Canada is trailing many countries, even though we have had some outstanding women trailblazers. We still have some inaccurate assumptions and wonky standards to tackle.

She advised the audience to talk early and often around our kitchen tables with our daughters and sons about leadership and get to work on the skills they need to lead together on the issues all genders are facing.

Third Age Barrie’s organizing committee was excited about developing this series on Women and Power in 2019; at the same time, committee members did wonder whether it would appeal to the TAB demographic. As the sold-out status clearly shows, the topic was very well received by the TAB community. We should never underestimate our community’s enthusiasm to learn.