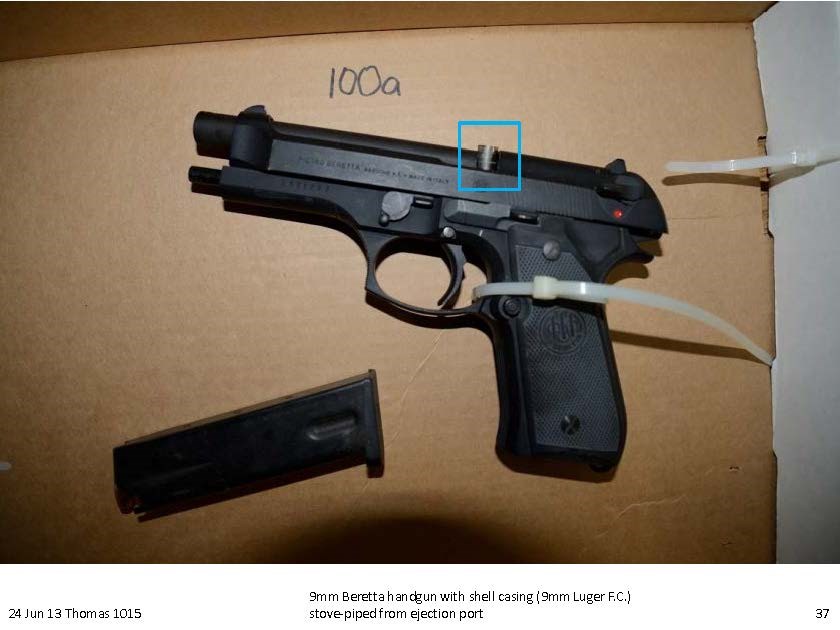 The jury at the first-degree murder trial of Mitchell Brooks is learning about the 9mm Beretta handgun involved in Deena Brooks' death.

Grant McGimpsey is a forensic scientist who specializes in firearms and tool marks.

He told the Barrie jury that he examined and test-fired the Beretta and it was in firing condition and "it did function as designed."

"It was in very good condition. I did not experience any issues," he testified.

Court heard that McGimpsey also examined Deena Brooks' blue and white sweater and black top she was wearing when she was shot.

He also examined autopsy photos of the bullet wound in her chest.

Court was told McGimpsey is an expert in distance determination including clothing and tissue examination.

"I concluded that the muzzle-to-target surface distance was less than four inches from the deceased at the time the shot was fired," McGimpsey testified.

He told the jury that in addition to the bullet, gun powder particles and vapours and gas are released when a gun is fired.

The court has heard that the Beretta had "stove-piping" where the firearm is unable to eject a cartridge case.

McGimpsey had testified the Beretta was in good working order when he test fired it and was asked by the crown what could have caused the stove-piping.

The forensic expert said clothing too close to the slide could affect its movement - anything that's going to impede it.

Mitchell Brooks has pleaded not guilty to first-degree murder in the May 2013 death of his wife Deena.

During a 911 call played to the jury, the call-taker asks Brooks who shot Deena.

He replied "We were fighting over it. (ie the gun.)"

Hear the call 9-1-1 operators received on the night Deena Brooks died
Feb 29, 2016 5:37 PM
Comments
We welcome your feedback and encourage you to share your thoughts. We ask that you be respectful of others and their points of view, refrain from personal attacks and stay on topic. To learn about our commenting policies and how we moderate, please read our Community Guidelines.