Tattoo circuit boards and the future of manufacturing 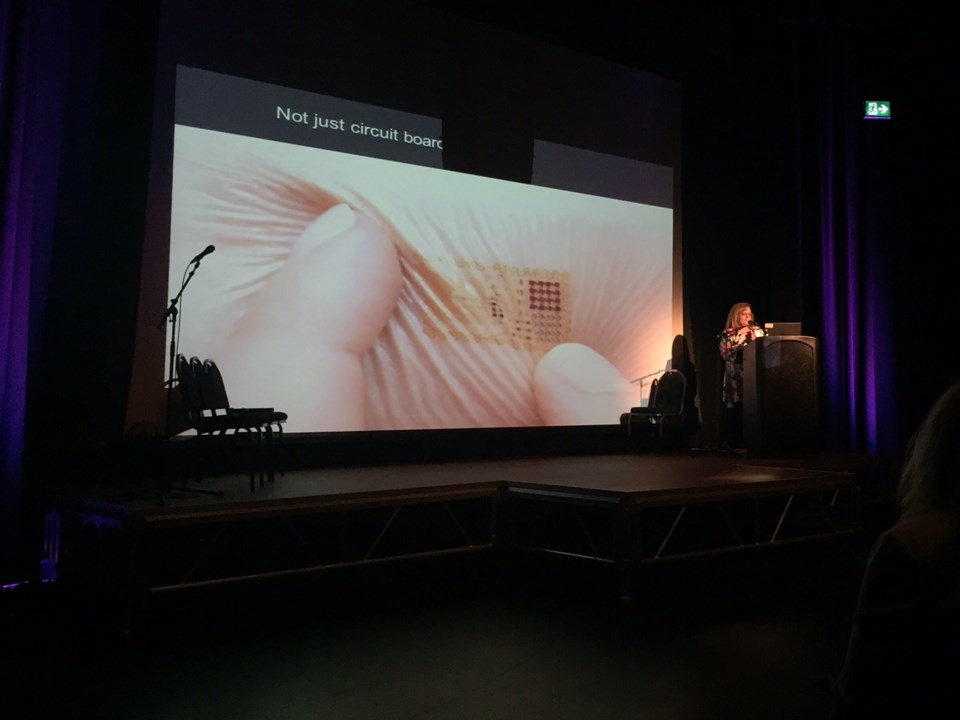 An image of a tattoo circuit board flashes on the screen as keynote speaker Irene Sterian addresses Barrie's Manufacturing Innovation Summit on April 20, 2017. Sue Sgambati/BarrieToday

The manufacturing industry must marry hardware and software, people and technology in new ways, not only for the future but for the now, Barrie's first Manufacturing Innovation Summit was told.

Keynote speaker Irene Sterian told a packed Mady Centre Thursday morning that Canada has been slow to adopt Industry 4.0, the current trend of automation and data exchange in manufacturing technologies.

"This is a bit unsettling in terms of 97 percent of manufacturing businesses know that they're going to be impacted but Industry 4.0 in the next three to four years but only 16 percent have a plan," Sterian said.

Sterian is ‎Director of Technology and Innovation Development at Celestica and Executive Director of the ReMAP Network.

Manufacturing industry experts from across the province have gathered for the one-day event which is being co-hosted by the City of Barrie, Georgian College and ventureLAB.

Industry 4.0 creates what has been called a "smart factory" and Sterian offered the audience tips on how businesses can get on board.

Barrie is currently home to over 490 manufacturers providing 6000 jobs. The city has been ranked to be Canada’s second lowest cost city of manufacturing operations according to KPMG’s 2016 Competitive Alternatives report.

Sterian cited General Electric as an example of a company that just hired more than 1,000 software engineers.

The manufacturer isn't throwing out the entire production line, she said, but is integrating more software and hardware together.

"They're reinventing themselves into a software company and again they're not going to become a software company solely. They're still hardware but they're looking at how to use services more and more to generate revenue from their products that are hardware."

At one point during her remarks, Sterian put a photo of a tattoo circuit board on the screen.

"This is the circuit board of the future. It's not a circuit board that you expect anymore. It's disposable. It's a tattoo on bandaid," she said.

Wearables and implantables are already a reality that started with ipod earbuds but now Sterian says there's a variety of them and they're all sensors.

"Right now there's something like 1,200 sensor companies out there creating sensors which can be applied to the manufacturing world," she said.

The future trend is to use existing hardware and depreciated machines to build something new and with digital manufacturing, there's a need for data and to simulate data.

"The Mars landing was 8,000 practice runs in simulation to get the one landing correct and there's going to be more of that happening in terms of simulation of product from design to development to manufacturing before actually building it in the physical world," she said.

"'Data is the new oil,'"Sterian quoted Nikolas Badminton, a researcher and futurist based in Vancouver.

"It's really the new commodity. So all these sensors are collecting all this data and what we do with the data will become more and more important."

Industry 4.0 is products and machines talking to each other and really communicating more like a brain, she said.

"I get asked a lot about will all of these jobs will be gone because we're doing all this automation and I don't think that's the case. I think people will always be the innovators. We're just going to have better jobs and more skilled and technically heavy jobs as opposed to more mundane jobs," she said.

Reduction in number of county councillors being pondered
Feb 28, 2020 7:30 AM

Good morning, Barrie!
Feb 28, 2020 6:00 AM
Comments
We welcome your feedback and encourage you to share your thoughts on this story. We ask that you be respectful of others and their points of view, refrain from personal attacks and stay on topic. To learn about our commenting policies and how we moderate, please read our Community Guidelines.