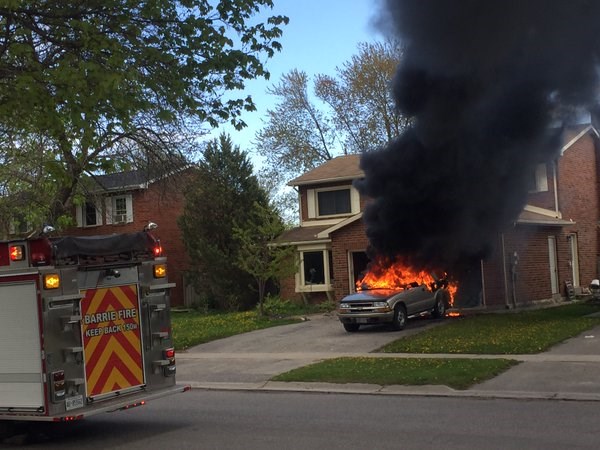 A Barrie Fire Prevention Officer happened to be across the street when this SUV burst into flames. Photo Barrie Fire and Emergency Service Twitter

A Barrie Firefighter was practically on scene when an SUV burst into flames in the driveway of a Peplar Place home on Thursday.

"One of our Fire Prevention Officers just happened to be across the street doing an inspection," said Barrie Public Fire and Life Safety Officer Samantha Hoffman.

The Fire Prevention Officer snapped a dramatic picture of the vehicle fully engulfed in flames and the photo was tweeted on the Barrie Fire Twitter account.

The fire was quickly knocked down when crews arrived.

No one was injured but the SUV was destroyed.

"When cars are stationary and catch on fire it is usually electrical in nature or because an unlicensed person was working on it," said Hoffman. "When they catch fire while in motion it is usually a blown gas/oil line."

Barrie Fire and Emergency Service shared some tips on how to prevent car fires including having your vehicle serviced regularly by a professionally trained mechanic.

Trojan swimmers race their way to medals in Windsor
Feb 27, 2020 9:00 AM
Comments
We welcome your feedback and encourage you to share your thoughts on this story. We ask that you be respectful of others and their points of view, refrain from personal attacks and stay on topic. To learn about our commenting policies and how we moderate, please read our Community Guidelines.