SS Keewatin gets another lifeline to stay in Port McNicoll

With new curator on board, Friends of Keewatin expect smooth sailing as they reapply to Department of Canadian Heritage
Oct 16, 2020 5:00 PM By: Mehreen Shahid 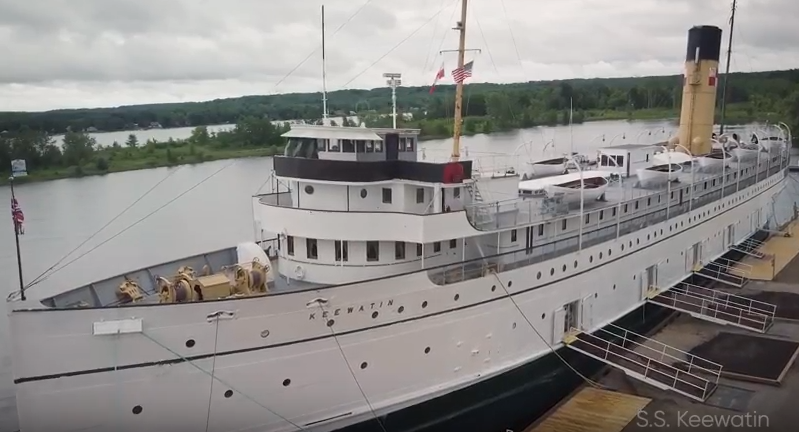 The SS Keewatin is docked at Port McNicoll and a non-profit group, Friends of Keewatin, hopes to keep it there. File photo

The Friends of Keewatin are making a comeback with hopes of keeping the ship anchored in Port McNicoll.

The group will now be resubmitting its application to acquire a Category B designation with the Department of Canadian Heritage (DHC) to provide Skyline with a tax receipt in exchange for keeping the ship in Tay Township.

The update came from David Blevins, director of external communications for the group, after the matter came up at Tay’s council committee meeting this week.

“Our original application to Heritage Canada was deficient in a couple areas,” he said. “One of the big areas was to find a full-blown curator. And now Fred Addis (former curator for Orillia’s Leacock Museum) is onboard with us. That really gives us the credibility we need for this re-application.”

Blevins said Addis is collaborating closely with the curator of the Simcoe County Museum.

“We've got the horsepower we need to go forward,” said the Friends of Keewatin member. “What's exciting is the dedication of these people that want to keep the ship where it is. There's a lot more positive happening than I can share, but we're extremely excited about being able to put those pieces together.”

Blevins said the next step involves continuing to work with Skyline.

“They want us to carry on,” he said. “They just want a solution or a resolution to the tax implication.”

Blevins said the support from local politicians and residents has been immense and he encouraged people to visit their online petition to sign it if they haven’t already done so.

At the meeting on Thursday, Mayor Ted Walker informed council members of the county’s letter, which indicated it does not have the Category B designation with the Department of Canadian Heritage needed to settle the tax receipt requirements with Skyline to keep the ship in Tay.

Hence, the county has handed matters back to the non-profit group, advising Tay Township to also fold the matter at its end.

“To close the loop, the county is asking for a letter by the municipality that our request be withdrawn,” said Walker. “I've talked to the warden and I've talked to the Friends and everybody agrees that's the process that needs to be followed.”

One council member said he was caught off guard by this move.

“Did the Friends notify the municipality that they were pulling out of the county?” said Coun. Barry Norris.

Walker said he had discussions with the group and they had talked separately to the county.

“I definitely support the recommendation to close the loop,” Norris said, adding the municipality took a lot of flak from the public for not immediately supporting the initial request. “And they didn't turn around and tell us about it and that bothers me.”

He said he was under the impression that the Friends had already checked that the county had the required designation.

“Obviously, there must have been some miscommunication there,” said Norris. “I do hope the Friends are able to get that boat. It just kind of leaves a little bit of a bad taste in my mouth.”