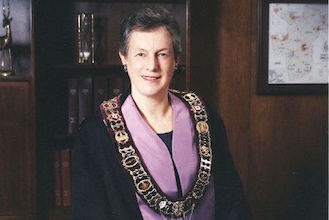 The first ever mayor of Springwater Township, Coutts also served as reeve of the former Vespra Township,  and was elected to the office of Simcoe County Warden in 1999 - the third of only three women in history to ever hold the top post.

Coutts died Tuesday at St. Michael's Hospital in Toronto with her family at her side.

"I really thought of Helen as a great mentor and a teacher," recalled Barb Baguley, former Mayor of Innisfil and fellow County Councillor. "Back in those days, female representatives on County Council were definitely in the minority. Helen had a stick-to-itiveness, a positive, common sense attitude and that was admirable."

Coutts was actively involved in the community and contributed to a number of boards, committees and organizations.  She was elected to the Board at Royal Victoria Hospital (RVH) as a Municipal/County Member in 1998, she was elected to the Board as a Director in 2003 and remained on the board for 10 years. Additionally, she was a member of the Hospital Auxiliary and volunteered in the Café Royale.

As a member of Midhurst United Church, Helen sang in the choir and participated in the United Church Women’s Group. She was past president of the Crown Hill Women’s Institute and served on the Advisory Committee for the Simcoe County Museum.

“Helen put her heart and soul into the community,” says Mayor Bill French. “She helped shape Springwater into the place it is today and will be remembered fondly for her tremendous contributions to the community at large. She will be missed by all who knew her.”

Baguley praised her former colleague for "leading the way for women in local politics."

"She was a dedicated and enthusiastic politician," Baguley said. "She spent time in office, she was a positive representative and when you see someone like that doing what you want to do, you know that anything is possible."

Coutts is survived by her husband Ron, her children Janice (Roger) and Gordon (Amy) and her six grandchildren.